Amid Civil War And Famine, Yemen Is Facing A New Killer: Dengue Fever 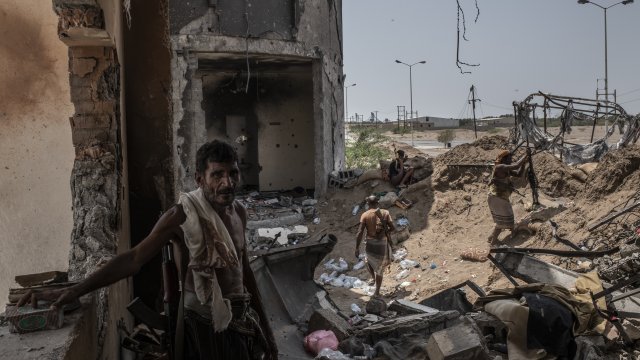 As civil war in Yemen has killed 100,000 people, more have died from starvation and disease, including new outbreak of mosquito-borne virus.

The International Committee of the Red Cross is warning of "a very dire humanitarian situation" in Yemen. Thousands of people in the war-ravaged country are now getting sick with dengue fever, a debilitating disease transmitted by mosquitoes.

The new outbreak comes on top of an ongoing cholera epidemic that has sickened nearly 60,000 people since January.

The United Nations and international aid groups describe the situation in Yemen as particularly grim, amid a disastrous civil war. It broke out after Houthi rebels, supported by Iran took over the capital city. A Saudi-led coalition has since responded with a sustained bombing and ground campaign.

The combat has claimed around 100,000 lives in almost five years. The U.N. says famine and disease have killed another 130,000, as the war has stranded millions of people without clean water or adequate food.

International Red Cross official Robert Mardini says: "We have recently been extremely worried and concerned by reports of dengue outbreak in addition to cholera...With the violence and the fighting, it is a big challenge to control this epidemic."

In 2019 alone, more than 3 million people in Yemen were forced from their homes, prompting the International Rescue Committee to list Yemen as the world's greatest risk of humanitarian catastrophe.