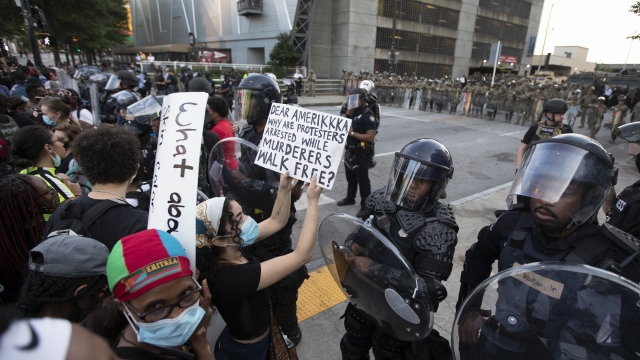 The filing of charges and policy restructuring are signs that some community protests are getting results.

As protesters across the country continue to call for change, signs of a shifting tide are appearing in Atlanta.

"I feel a little safer now that these monsters are off the street and no longer able to terrorize anyone else," Messiah Young said.

Six Atlanta police officers have been charged after a graphic body camera video surfaced showing them tazing and dragging Messiah Young and Taniyah Pilgrim from their car in traffic Saturday night. We want to warn you that this footage is hard to watch.

The officers involved are facing charges that range from aggravated assault and aggravated battery to pointing a gun.

Across the country, activists are seeking to hold law enforcement accountable for bad policing practices. In some communities, they're getting action.

In Ohio, the NAACP is working to gather local leaders and lawmakers for a justice summit on June 10, according to News 5 Cleveland. The summit aims to look to change Ohio laws to hold officers accountable in incidents of excessive force.

In Michigan, the Southfield Police Department has announced it has begun implementing a new policy that it calls the "duty to intervene." It requires an officer to step in if they witness another officer doing something illegal.

"Fail to have the courage to intervene you will be held accountable," Southfield Police Chief Elvin Barren said.

Activist Deray McKesson has been working to enact police reform since 2014 and he tells Newsy there are several policies every police department should have in place to better protect the community.

"There are really simple things we can do like banning chokeholds, right? Like, requiring officers to intervene if they see that another officer is engaged in wrongdoing. These things are simple. Requiring deescalation, that an officer has to exhaust all other means before they use deadly force," McKesson said.

Minneapolis is one of several police departments around the country that allows its officers to use chokeholds and neck restraints when making an arrest.

"The solutions are simple. The hard part is we do not have political leaders with the courage to implement them," McKesson said.

An NBC News analysis found the neck restraint tactic that officer Derek Chauvin used on George Floyd before he died has been used by the Minneapolis Police Department at least 237 times since the start of 2015. Forty-four of those resulted in unconsciousness.

As activists continue to protest and demand structural change, many are expressing hope that lawmakers and law enforcement are listening. But for now, protests show no signs of slowing down.