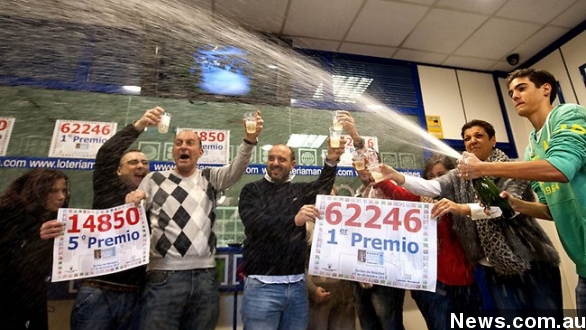 ​Millions of Spaniards were glued to their televisions Sunday during a 4-hour TV show to announce the winners of the world's richest Christmas lottery.

The Spanish Christmas lottery awarded around 3.4 billion dollars in prize money, all this with the country in the middle of a recession. (Via The Guardian)

"Unlike lotteries that offer one huge jackpot, Spain's yuletide drawing offers a variety of winnings to thousands of ticket holders." (Via WAGA)

Most of the winners received small amounts, but a few lucky ones won the top prize, "El Gordo," Spanish for "the fat one," worth more than $500,000 per ticket. The second largest prize is near $171,000. (Via Headlines & Global News)

CNN and Euronews feature some of the big winners:

"Raimunda Perez paid $55 for two tickets now worth just over a million. It was a joint buy, typical in Spain, to be split among nine retired married couples."

"This man says he'll take his Bolivian girlfriend to visit her family for the first time in many years."

"We jumped out of bed recounts this winner. We were watching the draw. We'll pay off the mortgage and then just enjoy life."

Spain has an unemployment rate just above 25%. And, CBS reports many of the winners were from some of the hardest-hit communities.

"One woman, also a winner, says her family has been living on welfare. And another woman said she'd buy a house, and help her children, all of whom are unemployed."

The largest chunk of change from the lottery will go to the Spanish government. Because of the country’s economic crisis, for the first time the winners will be taxed at a rate of 20-percent. (Via KTVK)

​Sky News points out the winners have a very different attitude this year compared to those of previous years.

"Before Spain's property-led economic boom imploded in 2008, ticket buyers often talked about spending their winnings on new cars, beach homes or fancy vacations. Now many Spaniards are just hoping to avoid having their homes or cars repossessed."

The lotto is also one of the world’s oldest and started in 1812. The drawing is always held on December 22. (Via WRBL)

"The Spanish Christmas Lottery works differently to most lotteries in the world. ... You don't have to buy the entire ticket. However, if you don't buy the whole thing, you can't get the whole winnings!" (Via About.com)

While overall spending for the lottery was down 4% this year, lottery officials say Spaniards are still spending around $68 per person on lottery tickets.