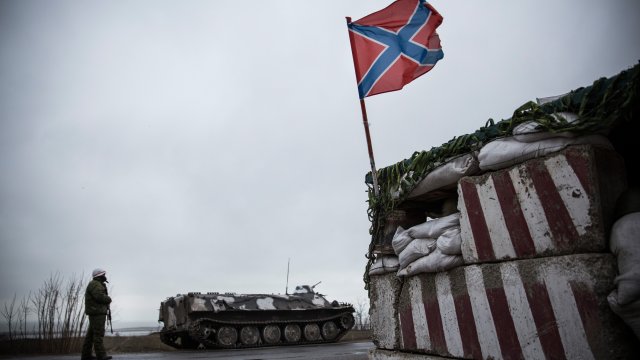 In a July phone call with Ukraine's leader, President Trump showed no curiosity about war with Russian-backed rebels that has killed 13,000 people.

On July 25, when President Donald Trump spoke on the phone with President Volodymyr Zelenskiy, this was the situation on the ground in Ukraine:

Since 2014, 13,000 people had been killed and 30,000 wounded in a war in eastern Ukraine between Russian-backed separatists and Ukrainian forces. The United Nations said more more than 3,300 killed were civilians.

Russia in 2014 had invaded and annexed Crimea, a Ukrainian peninsula with critical strategic importance and valuable natural gas reserves.

Eight months before the two presidents' conversation, Russian naval forces attacked and boarded three Ukrainian ships in the Crimean port of Azov near the Black Sea.

And Ukraine claimed brigades of Russian troops, 80,000 strong, remained massed at its border. Ukraine, which broke away from the former Soviet Union, sees their presence as an implicit threat.

Yet President Trump didn't ask President Zelenskyy about conditions in Ukraine, according to the transcript of their call. Instead, after the Ukrainian leader mentioned wanting to buy shoulder-fire anti-tank missiles "for defense purposes," President Trump responded: "I'd like you to do us a favor though." He went on to request that Ukraine investigate former Vice-President Joe Biden and his son.

The Washington Post reported that President Trump a week before the call had instructed his acting chief of staff to hold back nearly $400 million in aid Congress approved for Ukraine. It included $250 million for military training and equipment.

The U.S. has authorized more than $1.5 billion in assistance to Ukraine since Russian separatists, with tanks and heavy arms, first mobilized in eastern Ukraine.

The U.S. and the E.U. began imposing economic sanctions on Russia over its annexation of Crimea and intervention in Ukraine. Yet President Trump has portrayed Crimea as evidence of President Putin "outsmarting" President Obama.

He delayed new Russia sanctions imposed by Congress and has argued for readmitting Russia into Group of Seven economic organization after its expulsion over Ukraine.

The White House informed lawmakers on Sept. 11 that it was releasing the money for Ukraine. That came one month after a whistle-blower's complaint alleged that President Trump solicited foreign interference in the 2020 election when he sought Ukrainian help in investigating his leading political rival.