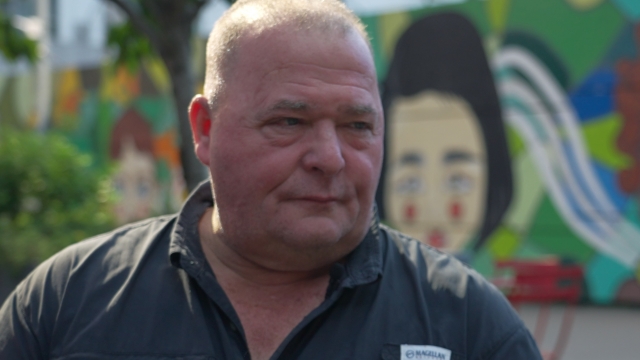 An American held captive by the Russians during the Ukraine invasion was rescued after being held captive.

Terry Gately is a minister from Texas. He went to Kherson, before the Russian invasion, to visit his girlfriend and do volunteer work.

"They bag my head with a black bag, handcuffed me, put me in the van and started screaming at me in Russian," Gately said.

He experienced first-hand the types of abuses by Russian authorities in occupied areas of Ukraine. Exposed in a new report from Human Rights Watch, and also a newly-declassified assessment from the U.S.' Director of National Intelligence, they document Russia's "arbitrary detention" of civilians and of torturing individuals in their so-called "filtration" camps.

U.S. Intelligence has identified 18 such facilities the Russians use to decide whom to send to Russia. In many cases, it's for imprisonment.

The Russians occupied Kherson so fast in the first days of the war, few could escape.

"And I just happened to be in the one place that the Russians took on the first day. If I would have been anywhere else, I would have said, 'oh, there's a war. Well, I got to go'. But that didn't happen," Gately said.

He recorded photos and video of an increasingly terrifying life under Russian occupation.

"You can't use your debit card anywhere because now they're saying all this part of Russia. There are a lot of inconveniences. But the way Russia does things when they occupy, they let you know it's theirs right from the get-go. And then they're like a like a python that wraps itself around you. And as you exhale a little bit, it gets tighter," he said.

In fact, Russian intelligence agents grabbed him off the street one day for questioning, throwing a bag over his head.

TERRY GATELY: I'm a 63 year old. Nobody. I mean, really, if you search everything about me, you'll find out nothing because I am nothing. They let me go out for three hours and said I had to make three videos.

GATELY: A few days later I had to make the first video and it was with a Moscow TV crew. And I was on Moscow TV, apparently, and they basically said that I was okay. The Russian army was not hurting anybody in town and me, especially me, no one had hurt me. And they agreed to take me to the American Embassy in Moscow safely.

At that point, U.S. Embassy staff in Ukraine had long since  been evacuated. But he says the State Department was following his case and warned him against going to Russia.

"The State Department the next day called me and said, 'under no circumstances whatsoever do you do that unless they force you. Do you understand?' I mean, they were adamant," Gately said.

Heeding the State Department's advice, he told the Russians he did not want to go to Russia and finally decided to escape Kherson.

His escape was orchestrated by a group of American soldiers who had led rescues first in Afghanistan and then in Ukraine.

Bryan Stern heads the volunteer rescue group Project Dynamo; he told Gately to get on a specific bus that would take him to safety.

BELLINI: So to get someone like Terry out, you have to work with the Russians.

GATELY: The bus driver will know you. The password is 'white Mercedes.' We have people on the bus that you don't know about, but they'll take it from there.

But he says over 50 Russian checkpoints stood between him and freedom.

"Every time they saw I was American. But this time they took me off the bus. Get me there, look through my phone, and I'm a licensed carry instructor for the state of Texas. So I got a lot of gun pictures. They swore up and down that I came to Ukraine to train people, to shoot, to use guns and kill Russian soldiers." Gately said.

The Russians took him to a local prison similar to the filtration camps many are facing. Gately said he was tortured by not being allowed to sleep for more than three days.

He says he heard the screams of other prisoners who he thought were being tortured.

"From the screaming I was hearing those two days, I'm pretty sure it was, but I didn't witness it," he said.

Then, suddenly, without explanation, the Russians let him go, abandoning him on a street outside Kherson.

"I took off the bag and there was a guy standing there and he goes, you want to go to Zaporizhzhia? And I'm like. I sure do," Gately said.

Stern won't say how exactly he arranged for Gately to get to safety and return to the U.S., but Gately was fortunate. Untold Ukranians and even some Americans who disappeared are still missing.