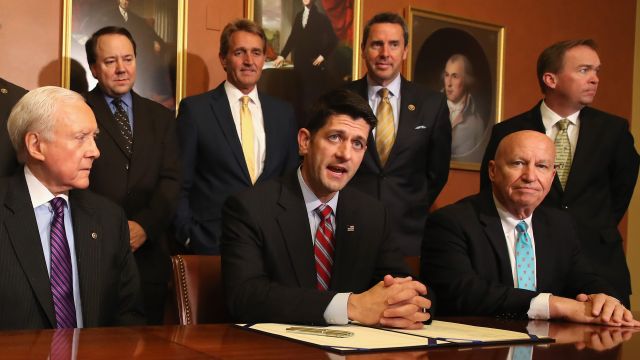 House Republicans voted against their own spending bill after an anti-LGBTQ-discrimination clause was attached to it.

House Speaker Paul Ryan just wants to get the House running properly again. Trouble is, his plans keep getting bogged down in political skirmishes.

House Resolution 5055 started life as a funding bill for water and energy agencies. But after Democratic Rep. Sean Maloney successfully attached an anti-LGBTQ-discrimination amendment, the bill became a flashpoint for the chamber's battle over LGBTQ rights.

In recent years, funding measures like these would be worked out among senior members of Congress and then smushed into a massive omnibus bill at the end of the year. But Ryan wants to restore what's known as "regular order" to the process, letting individual members debate and amend spending provisions.

That process can get kind of messy, though. Maloney's amendment was initially supposed to latch onto a military spending bill last week, but Republicans held the vote open for several extra minutes to whip lawmakers into changing their votes. Democrats objected vocally to the maneuver.

Republicans attached their own poison pills to the latest spending bill after Maloney's amendment passed; a majority of Republicans and almost all Democrats voted against the final bill. Ryan later accused the Democrats of sabotaging the legislative process.

Democratic Rep. Steve Israel called the new appropriations process "a huge opportunity to put Republicans on the record on issues that alienate most independent, moderate voters." House leaders are reportedly looking at ways to change the rules and prevent more contentious floor scenes in the future.

This video includes images from Getty Images and clips from C-SPAN and Speaker of the House Paul Ryan.