Anchor Wears Same Suit Every Day For A Surprising Purpose 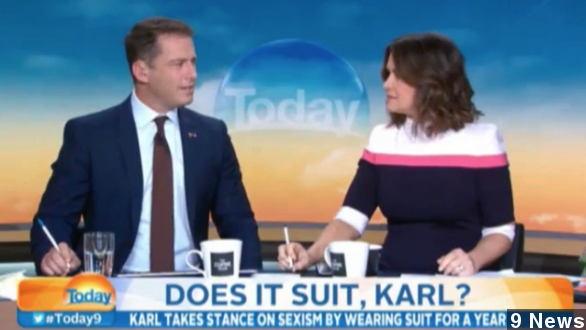 Anchor Karl Stefanovic revealed he's been the wearing same suit on air every day for a year to make a point about sexism.

An Australian TV host has completed an experiment: he wore the same suit every single day for a year, and no one noticed. The purpose? To point out sexism.

"It started with me wearing the same suit for about a month before I even told you. ... After a month I said, worn this suit for a month, let's see how we go. And you went, 'Yeah cool, that would be fun.' So, that's what's happened. ... Some people have called it sexism and reverse sexism and whatnot." (Video via 9 News)

Yes, GIRT Nation even put this mashup together — Karl Stefanovic wore the same suit every day for a year except for a few times when he got it cleaned. He did change the shirt and tie.

And viewers didn't notice. They didn't complain. Stefanovic wanted to point out that while his female co-anchor is constantly judged for what she wears, he is not.

The Sydney Morning Herald spoke with him.. "I'm judged on my interviews, my appalling sense of humour – on how I do my job, basically. Whereas women are quite often judged on what they're wearing or how their hair is ... that's [what I wanted to test]."

Both Stefanovic and his co-anchor, Lisa Wilkinson, pointed out that most of the criticism she gets is actually from other women. She said she gets a lot of encouragement from women, but if she gets criticized, it's most likely from females.

Stefanovic and Wilkinson are well-known media personalities in Australia for their work on that morning show, "Today."

The suit story has gained worldwide attention, and anchors on the U.S.' "Today" show weighed in.

SAVANNAH GUTHRIE: "It's kind of an interesting point."

But the experiment first started after Wilkinson gave a powerful lecture in October 2013.

A portion of her lecture was published in The Sydney Morning Herald. One viewer who wrote in: ''Who the heck is Lisa's stylist? ... Today's outfit is particularly jarring and awful."

Wilkinson called for Australian media to promote healthier images of women in Australia. The lecture is definitely worth a watch or a read.

And her co-host's suit? An admirable experiment, but probably worth another wash.