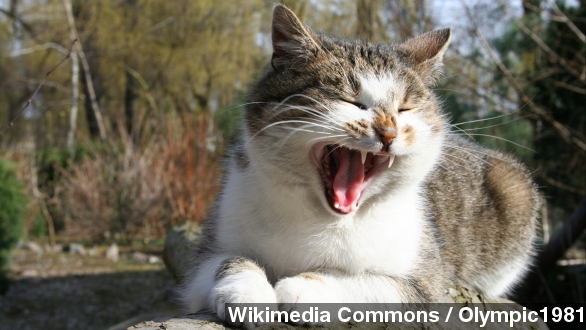 According to a new study cats may have been living alongside humans as early as 5,300 years ago in Northern China.

​From savage beasts in the wild to the domesticated LOLcats we know and love today — scientists know little about how cats came to be our fine furry friends — but a feline fossil discovery is giving researchers some new insight.

According to a study out of St. Louis’ Washington University, cats may have been living alongside humans as early as 5,300 years ago in Northern China. (Via YouTube / CompilarizTVi)

That surpasses the previous earliest-known records of cats living with people — some 4,000 years ago in Egypt. (Via National Geographic)

After analyzing chemical signatures on the more than 5,000-year-old cat bones found in an ancient rubbish heap, the scientists determined that at least one of the skeletons showed signs of a diet high in the farmed-grain millet — (Via The Guardian)

And after getting used to life around humans, the cats decided to stick around. Quoted by Ars Technica, one of the researchers said:

“Cats were probably brought into the human environment by farming and the rodents and other food available to them in farming villages. This might have made it possible to domesticate an animal that was nocturnal and not social.” (Via Ars Technica)

But the researchers say it likely wasn’t the litter box and cat toy setup we’ve got now. It's more likely cats were just tolerated for their ability to exterminate pests. (Via Animal Planet)

While the researchers say the discovery fills a previously unknown gap in the timeline of cat domestication, it also brought up new questions, like, where did these cats come from?

As the Los Angeles Times reports the area where the bones were found is outside the cats' normal habitat, which lead them to wonder, “Were they imported from the Middle East as novelties, or even food? ... and later displaced or wiped out?”

One of the cats studied was significantly older than the rest when it died and ate less meat, meaning it may have graduated from farmhand to pet.