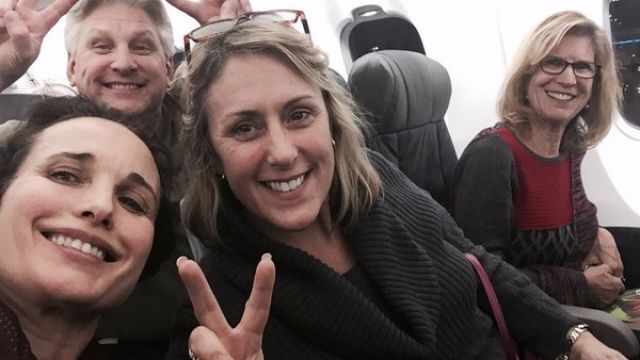 "Groundhog Day" actress Andie MacDowell was peeved she couldn't fly first class, despite having paid for it, because of her dog.

Actress Andie MacDowell learned a valuable lesson about the ugly side of social media. She was booted from first class on American Airlines, and she told the world about it.

It started with a message to the airline via Twitter. MacDowell said she paid for first class but was put in "tourist" class because of her dog Ava, whom she says she also paid for.

Some people were mean. One person called her a crybaby ex-celeb who hadn't made anything of quality in 20 years. Another simply called out her first-world problems.

The Examiner said the actress was "crucified" over the ordeal.

Others welcomed the complaining, saying customers deserve what they pay for, and that Twitter "can bring out the worst in #people."

MacDowell said the airline employee who refused to seat her in first class was rude. She also defended her use of the term "tourist class."

The "Groundhog Day" actress did try to direct the attention away from her — at one point asking to use the publicity to raise funds for literacy in South Carolina, where she was going to volunteer.

Eventually, she said she no longer cared, and just wouldn't be paying for first class on American Airlines again.

"Lessons learned never,complain on Twitter & don't pay for first class on American Airlines, only express gratitude...can we move on now💗"

And American Airlines did tweet back — telling the actress to direct message the company.

MacDowell said she hopes the airline will donate any refund to charity.