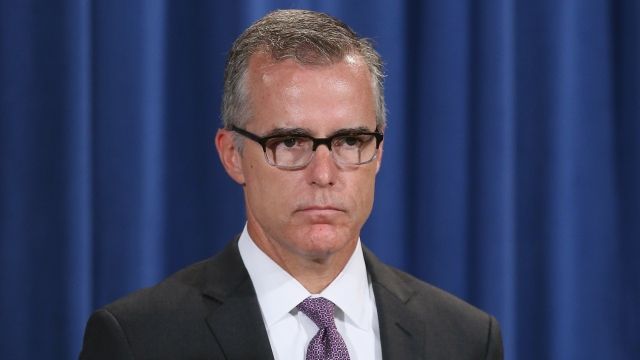 Andrew McCabe has worked for the FBI since 1996.

Andrew McCabe is now acting director of the FBI.

He was sworn in Tuesday after President Donald Trump fired FBI Director James Comey. The administration cited Comey's handling of the investigation into Hillary Clinton's private email server as the reason for his dismissal.

McCabe has worked for the FBI since 1996 and helped lead both the Washington Field Office and the Counterterrorism Division.

He was promoted to deputy director of the bureau in January 2016.

"Andy's 19 years of experience, combined with his vision, judgment and ability to communicate make him a perfect fit for the job," Comey wrote at the time.

His wife, Dr. Jill McCabe, unsuccessfully ran for a seat in the Virginia state Senate in 2015.

The couple made headlines last year when it was revealed Virginia Gov. Terry McAuliffe donated almost $500,000 to her campaign. McAuliffe is a close ally of the Clintons.

That had some questioning why Andrew McCabe was involved in FBI's investigation into Hillary Clinton's private email server.

At the time, the FBI said McCabe had followed ethics advice the bureau gave him — and that his wife's campaign was over by the time he had an oversight role in the Clinton investigation.

Some members of Congress aren't convinced that President Trump fired the FBI director for his handling of the Clinton email investigation.

But the Justice Department is now looking into that investigation. Part of its review will be if McCabe should have recused himself.

McCabe will head the FBI until Trump names a permanent replacement for Comey.