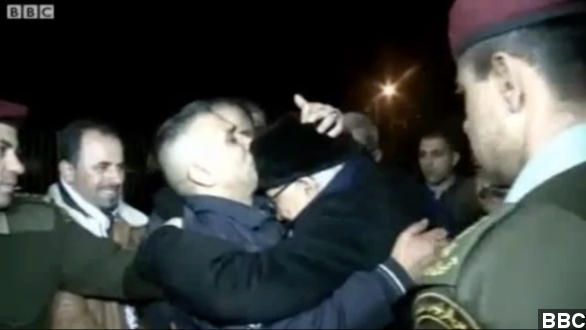 The release of 26 Palestinian prisoners convicted of killing Israelis was just the latest in ongoing peace negotiations drawing intense reactions.

Israel freed 26 Palestinian prisoners convicted of murder Monday night in a painstaking give-and-take. The negotiations over peace in the West Bank continue to draw ire from all sides.

Palestinian president Mahmoud Abbas embraced some of the prisoners as they were released. This is the third coordinated release of prisoners that will eventually total 104 people freed. (Via BBC)

The prisoners were serving long sentences for killing Israelis before the 1993 Oslo Accords that recognized Palestinians' right to self-governance. (Via Los Angeles Times)

Israel's prime minister Benjamin Netanyahu and U.S. Secretary of State John Kerry negotiated the prisoner release in an effort to get Palestinian leaders back to the negotiating table. The releases predictably sparked intense rounds of celebrations and anger.

"All the people who want freedom for themselves. They wait too long for this." (Via Al Jazeera)

The prisoners are often considered heroes at home because their attacks were motivated by Israel's occupation of the West Bank.

But the protests by family members of victims show the other side of the bitter feud. The sister and aunt of five people killed in 2011 told The Washington Post, “The U.S. government would not release convicted murderers, so why is it pressuring Israel to release terrorists and murderers?”

Meanwhile, Netanyahu defended the decision saying, "Leadership is judged by the ability to implement decisions, difficult as they may be. We were not elected to make easy decisions." (Via BBC)

Netanyahu is expected to announce plans for the construction of 1,400 homes in the West Bank and East Jerusalem. Again, criticism comes from both sides with some saying this trade-off isn't fair, and others saying construction eliminates whatever good will Israel gained releasing the prisoners.

Since Israel's 1967 occupation of the West Bank and east Jerusalem, the settlements have been considered illegal under international law, though Israel disputes this. (Via Australian Broadcasting Corporation)

Kerry is expected in the Middle East later this week to help keep negotiations going.