Anglerfish Rarely Seen In Its Habitat Will Haunt You 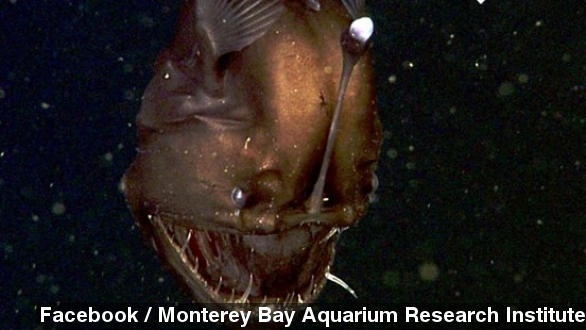 For the first time Monterey Bay Aquarium recorded a video of the elusive, creepy and rarely seen anglerfish.

The ocean is an amazing place: such a vast area full of mysterious and rarely seen creatures. (Video via National Oceanic and Atmospheric Administration)

The anglerfish is one of them. It's rare that the creature is caught on film, but one aquarium recently did just that. (Video via National History Museum)

The Monterey Bay Aquarium released a photo of the fish a few days ago on Facebook explaining, "This is the first time we've captured this fish on video in its habitat." At more than 1,600 feet below the surface, where it's pitch black, that's a rare accomplishment.

The picture attracted a ton of attention, so the aquarium shared a video Friday.

"Anglers have a remarkable apparatus on their heads — a fishing pole with a luminous lure on the tip which they use to attract prey. In the darkness of deep water they flash them to attract prey and draw them near the angler's mouth. When a fish ... swims up it is quickly inhaled," explained the Monterey Bay Aquarium.

Not exactly something you'd want to take home and cuddle. You probably couldn't even if you wanted to. According to the aquarium, only about half a dozen of the fish have been caught on video in its natural habitat.

Even Disney couldn't throw some cuteness magic on Ms. Anglerfish. I say Ms. because the most well-known feature of the fish, that little rod, is only on women — they're appropriately nicknamed Black Seadevils.

"The lure is created by bioluminescent bacteria that live inside the angler. ... If it's difficult to find food this deep it's even more difficult to find a girlfriend. Deep sea angler fish solve the problem by have extremely clingy relationships and never letting go, ever," explained National Geographic.

By comparison, the males are actually pretty helpless. No, very helpless and tiny — it searches through the waters only to find a mate which it then clings on to using its sharp teeth and fuses with the female. Then ... well, then it gets creepier.  (Video via Animal Planet)

"He then atrophies, losing his digestive organs, brain, heart and eyes and winds up nothing more than a pair of gonads, which release sperm when needed. ...To the female angler fish the human male is a very loud, annoying and unnecessarily complicated pair of gonads." (Video via Youtube / zefrank1)

Hey, everyone or everything is entitled to his or her opinion, right?

While spotting the anglerfish is rare, given that they live in one of the least habitable places on Earth, there are actually about 200 different species of the carnivores fish lurking through the waters. As you can see, none of them look any less freaky than their counterpart.

There's still a lot researchers don't know about the anglerfish. The ladies are typically about a foot long but can sometimes grow up to three and a half feet and 110 pounds. Also, it's able to eat prey twice its size. (Video via National Oceanic and Atmospheric Administration)

Which means no one is safe, not even this guy.

On that note, sweet dreams.

This video includes an image from Masaki Miya et al. / CC BY 2.0.