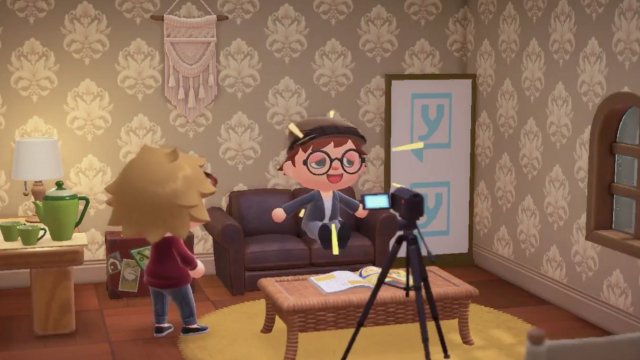 "Animal Crossing: New Horizons" has become something of a cultural touchstone during the coronavirus pandemic.

COVID-19 has disrupted life as we know it. Restaurants are shuttered, schools are closed, and everyday activities like going outside or speaking with friends have become fraught with risk. The real world has been largely shut down for weeks: luckily, there’s an alternative.

Wayne So is an American citizen living in Hong Kong with his wife Suki. After watching his wedding ceremony slip from February to — maybe? — sometime in October, So decided to throw a virtual wedding in the video game "Animal Crossing: New Horizons."

So told Newsy, "All of a sudden, I just had this idea. I was like, why don't we just you know, try it out in Animal Crossing."

"I got a little told off by it at first because she said that I spent so much time on it: almost as if I spent even more time on the Animal Crossing ceremony than the actual one."

And So isn't alone; people around the world have been hosting their own virtual weddings, parties and other events in Animal Crossing. Somehow, this cute little game about talking creatures on an island has become a defining touchstone of the pandemic.

So told Newsy, "We would have friends that say like, never even touched a console in their life and now they're like just playing, you know, hours and hours and hours a day of Animal Crossing."

The prolonged social distancing needed to fight the pandemic has left over half of the country feeling more isolated and lonely than before, according to a Newsy/Ipsos poll. With real-life options limited, Americans have been adopting more virtual methods to mingle — including by playing more video games.

Animal Crossing gives its players a uniquely tangible outlet for socializing with their friends: you can't bop someone over the head with a net in a Zoom call, after all.

And the game's customizability has led to some ambitious projects.

Writer Gary Whitta, of Star Wars: Rogue One fame, first set up a virtual talk show set in his basement on a whim. He's now booking celebrity interviews and live musical acts for what's become a regularly hosted talk show — streamed from inside a video game.

Whitta said, "The weird thing is we're not pretending to do a talk show anymore. We're actually doing a talk show."

"Originally, I just wanted to put a smile on my wife's face and just kind of on my own, and just like, isn't this cute? But people have responded to it in a way that went beyond anything we could have imagined or expected. And now it's weirdly kind of a big deal."

Animal Crossing might seem an odd choice for digital hangouts: there's only so many virtual furniture options and preprogrammed emotes to work with, after all. But engaging with those limitations is actually part of the appeal: trying to set up, say, a spa area with whatever bits of furniture you can cobble together, forces players to really get invested in their surroundings.

Dr. Rachel Kowert runs the non-profit group Take This, which studies games from a mental health perspective. She says the game offers something people aren't getting from other methods of digital interaction.

Kowert told Newsy, "Animal Crossing and other games kind of like it are playful spaces, and they are interactive. So they allow us to actively engage others and have these shared experiences."

These shared interactions of a game can sometimes be more powerful than a face-to-face conversation — they can even happen during allegedly professional journalism interviews.

Ultimately, Animal Crossing is appealing because of the contrast it draws to the real world. As real-life restrictions linger and uncertainty looms, having a little virtual space with clear-cut rules and affordances is an attractive prospect.

Kowert told Newsy, "We're very socially isolated. We are feeling a little out of control, right, we can't really control our environment. So what better game to have than one where you're creating your own island, your own house, your land, your own little society."

And Whitta said, "Animal Crossing is a worId where the worst thing that can happen to you is you get stung by a wasp. Everyone's friendly, and nothing bad ever happens, I don't know about anyone else, I can't speak for anyone else, but that's just what I needed."