After Violence And Lawsuits, Ann Coulter Won't Be Speaking At Berkeley 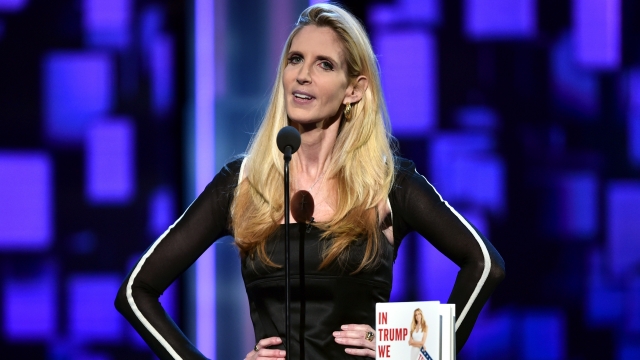 The broadcast personality said she wouldn't speak at the university after the student groups that invited her backed out.

After roughly a month of heated deliberation, broadcast personality Ann Coulter says she won't speak at the University of California, Berkeley.

The speech was originally set for April 27, but the school canceled it, citing security concerns.

The university offered to reschedule the event for May 2, but Coulter and the student group that invited her said no.

Then the Berkeley College Republicans gave up on rescheduling Coulter's appearance, but they filed a free-speech lawsuit against the school.

The Young America's Foundation, a co-plaintiff on the lawsuit, said the university couldn't protect against "unrestrained leftist agitators."

Milo Yiannopoulos has resigned from Breitbart News, but he says he plans on starting his own media venture.

Coulter shared her official decision not to speak on Twitter two days after the lawsuit was filed.

Berkeley's chancellor has argued when safety is in question, speakers should decide if their goals are open-and-safe discussions or if they might stir up trouble.

On the same day Coulter dropped out, alt-right provocateur Milo Yiannopoulos said he was coming back to Berkeley in the fall for a week's worth of speeches.

The university canceled his speaking gig in February in the wake of violent riots. He said he'll now bring his own force to secure the venues.