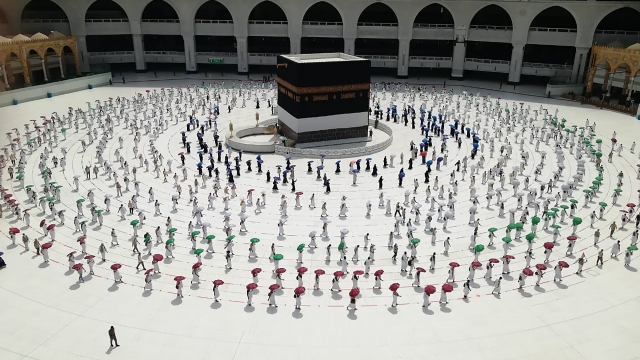 Hajj is typically one of the world's largest religious gatherings, but this year only about 10,000 people are attending due to virus restrictions.

The annual Muslim pilgrimage Hajj started Tuesday, and it looks a little different this year due to the coronavirus.

The hajj — one of the five pillars of Islam — is a journey to the holy site Mecca in Saudi Arabia. Every Muslim is supposed to make the pilgrimage  — if they're able — at least once in their life. Two-and-a-half million people do every year, bringing in about $12 billion for Saudi Arabia. It's typically one of the largest religious gatherings in the world.

This year, only around 10,000 pilgrims are participating, wearing face masks and moving in small groups that have been isolated for days. When they arrived in Mecca, they had to undergo temperature and virus tests.

Last month, the Saudi government decided this year's pilgrimage would be limited to Muslims already in the country. Cases there peaked in June, and now Saudi Arabia has less than half the daily count it did then.