Anonymous Wants You To 'Troll' ISIS 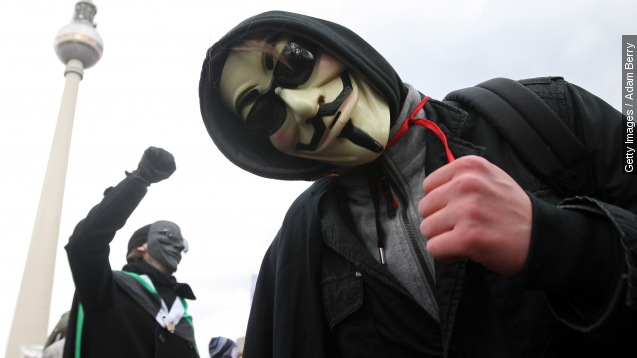 Cyberactivist group Anonymous chose Friday, Dec. 11 for its "The World Against ISIS Project." The group is asking people to "troll" ISIS.

The group of cyberactivists known as Anonymous launched an effort they're calling "The World Against ISIS Project," which took place Friday. (Video via Anonymous)

“On Dec. 11, we will show them that we are not afraid, we will not just hide in our fear, we are the majority and with our strength in numbers we can make a real difference," the group said in a post on Ghostbin.

The group is asking people to "show [their] support and help against ISIS by ... trolling them." Trolling, in this case, is a term Anonymous is using to describe harassment. (Video via Anonymous)

They've even provided ideas for trolling ISIS on different social platforms. And while it's unclear just how much of an effect this can have on the radical group, remember ISIS is infamous — in part — for its social media outreach.

"It is time to realize social media is a solid platform for ISIS communication as well as neutering their ideas of terror among youth," said the narrator in an ISIS video.

The same goes for Anonymous: The hacktivist group is best known for its online efforts. In fact, Anonymous declared war on ISIS following the attacks in Paris; their efforts have focused almost entirely on Internet-based attacks. (Video via Anonymous)

ISIS has begun to provide its supporters tips to secure their online accounts and prevent hacking from governments, Anonymous or any number of adversaries.

Anonymous' assault won't happen entirely online. Anonymous has scheduled several protests around the world. Two of the nine protests take place in France — one in Cannes and the other in Paris.