Another Report Points To Russian Involvement In The Downing Of MH17 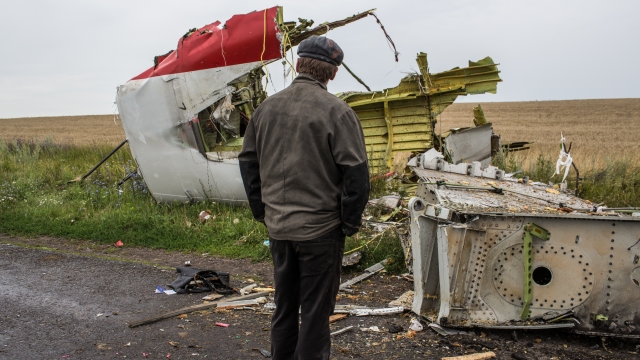 Russia's already been implicated in the crash (it was a Russian missile), and its statement calling Bellingcat's claims "cheap" came out a while ago.

Another report says Russia was involved in the downing of Malaysia Airlines Flight 17 — and the country is once again denying that claim.

MH17 was a commercial flight that was traveling from Amsterdam to Kuala Lumpur in July 2014 when it was shot down over Ukraine. All 298 people on board were killed.

Last year, the Dutch Safety Board concluded the flight was shot down with a Russian-made surface-to-air missile, but where the missile was launched from or who launched it is still unclear.

Since the crash, the citizen journalist group Bellingcat has released several reports implicating Russia, but Russia has denied the claims each time.

Bellingcat's most recent report shows pictures of the alleged missile launcher, which it says has features — like a dent — that match launchers that were in eastern Ukraine at the time of the crash.

The MH17 crash happened just months after Russian troops invaded the city of Crimea in Ukraine's east. Fighting in the area has continued ever since, despite several attempts at a ceasefire.

As for the report, Russia says Bellingcat isn't reputable and the claims are "cheap."