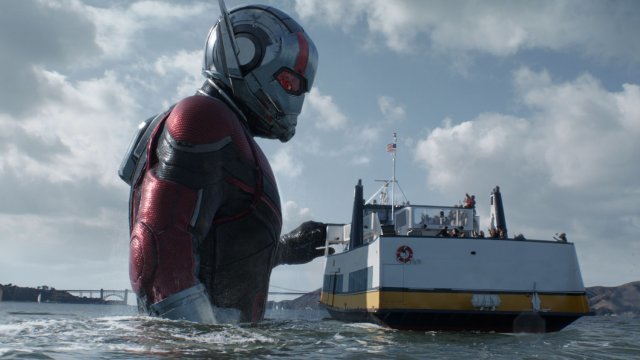 Superheroes continue to dominate theaters this summer. Five of the top seven movie debuts this year are centered around grown-ups in tights.

Taking the No. 1 spot in its debut weekend is Marvel's "Ant-Man and the Wasp," bringing in an estimated $76 million. That's nearly $20 million better than the original Ant-Man debut from 2015.

Along with a strong domestic showing, "Ant-Man" had some even better numbers overseas, pulling in a solid $85 million from the the foreign box office.

Unsurprisingly, superheroes continue to dominate theaters this summer. Scott Lang joins the likes of Wade Wilson and T'Challa by entering the list of top box office debuts this year. Five of the top seven movie debuts this year are centered around grown-ups in tights.

And they've made a combined $2.2 billion at the U.S. box office. Maybe we'll get sick of the Marvel movies one day, but we're not quite there yet.

As for the film itself, "Ant-Man" has received high praise from audiences and film critics.

After "Infinity War" managed to rip everyone's heart out and hand it to them, Paul Rudd's Ant-Man is a light breath of fresh air we all needed.

Christy Lemire of "What the Flick?!" said: "The first Ant-Man was really fun, and I really liked it a lot because the universe was not at stake. It was just a blast, and it was a giddy, fun ride. It was cool to see Paul Rudd play a superhero. … And this does all that, too."

Right in line with the first Ant-Man film and most of the Marvel Cinematic Universe, "Ant-Man and the Wasp" managed an 86 percent on the Tomatometer.

Just barely holding on to the No. 2 spot this week is "Incredibles 2," bringing in an estimated $29 million in its fourth weekend out. After just a month in theaters, "Incredibles 2" has broken another box office record, this time becoming the highest-grossing animated film of all time.

With $500 million at the domestic box office, Mr. and Mrs. Incredible took the top spot from a different Pixar film — "Finding Dory" brought in $486 million by the end of its theater run.

Falling to No. 3 this week is "Jurassic World: Fallen Kingdom," bringing in an estimated $28.5 million in its third weekend out. This much-anticipated "ginormous" sequel continues to overperform at the foreign box office, passing the billion-dollar mark in worldwide ticket sales.

That makes "Jurassic World: Fallen Kingdom" the third movie this year to hit that milestone — and the only one that didn't come from Marvel Studios.

As for next week, the laws of physics take a weekend off — because the Rock said so.