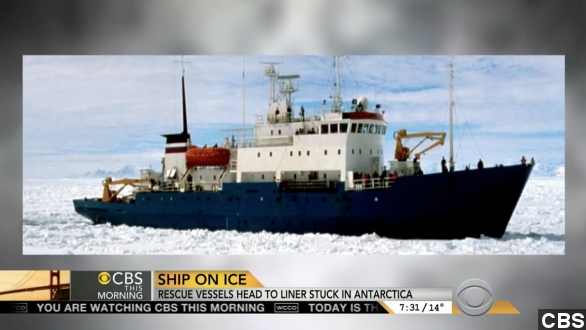 The Australasian Antarctic Expedition came to a halt on Dec. 24 when the vessel became trapped in heavy Antarctic ice.

​A group that’s been retracing the 1911 Australasian Antarctic Expedition, or AAE, got trapped in heavy ice just miles from the coast of Antarctica on Christmas Eve.

"Seventy-four passengers aboard this polar expedition vessel are waiting for icebreakers to free the ship." ...

"The vessel hasn't moved for the last two days. We're surrounded by sea ice. We just can't get through." (Via ABC)

The Academik Shokalskiy is three weeks into its month-long voyage.

It went from New Zealand to Antarctica, and departed the Commonwealth Bay area on Dec. 24 when fierce winds began tearing off the polar plateau. The ship then became surrounded and trapped. (Via io9)

The captain sent out a distress call to the Marine Rescue Coordination Centre early Christmas morning and three icebreaker ships are on their way to help, but it will be at least another day until they get there. (Via The Guardian)

"Authorities say they won’t reach the liner before Friday. The ship is stranded in the Australian search and rescue region about 1,500 nautical miles south of Tasmania." (Via CNN)

The goal of the expedition is to recreate Sir Douglas Mawson’s historic voyage about a century ago to see how the environment has changed over the years. (Via YouTube / Intrepid Science)

So far, reports are saying those on the ship are not in immediate danger. "They're believed to have enough food and water to last them a few more days." (Via NBC)

"We are hearing they are safe. We know also this is a ship designed for polar exploration." (Via HLN)

In fact, many seem to be in good spirits. BBC reporter Andrew Luck-Baker, who is aboard the ship spent some of his downtime asking how others were doing. Public Radio International (PRI) has a clip from one of the scientists on-board, expedition marine ecologist Tracy Rogers:

"I've actually been stuck a couple of times. I think it's fantastic. I love it when the ice wins and we don't, and it's just, it reminds you, you know, that as humans we don't control everything."

A large Chinese icebreaker is expected to get to the stuck vessel by Dec. 27.

"Once the ice-breaking ships arrive, they will clear a channel and allow the ship to finish its voyage. At this time, there are no plans to evacuate any of its passengers." (Via CBS)