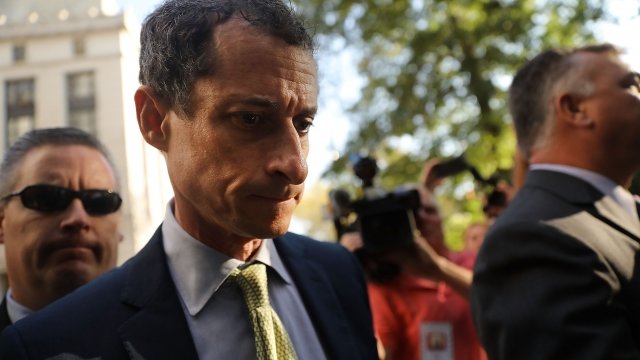 The former congressman was sentenced to 21 months in prison for sending sexual messages to a minor.

Anthony Weiner was sentenced Monday to 21 months in prison for sending obscene content to a minor.

Weiner resigned from Congress in 2011 after admitting to sending explicit photos of himself to multiple women.

Then last year, a story from the Daily Mail alleged Weiner had an online sexual relationship with a 15-year-old girl.

Evidence suggested Weiner knew the girl was underage when he sent her sexually explicit and suggestive material.

That scandal even played a part in the 2016 U.S. presidential election.

Weiner's now-estranged wife, Huma Abedin, was an aide of Clinton's during the presidential campaign, and she had forwarded those emails from Clinton to her husband's computer.

With those emails in mind, the director of the FBI told Congress days before the election that his agency might have new information regarding an investigation into Clinton's use of a private server when she was secretary of state.

As for Weiner, in addition to a 21-month prison term, he was sentenced to three years of supervised release.

As a part of his plea deal, Weiner agreed not to appeal any sentence less than 27 months.