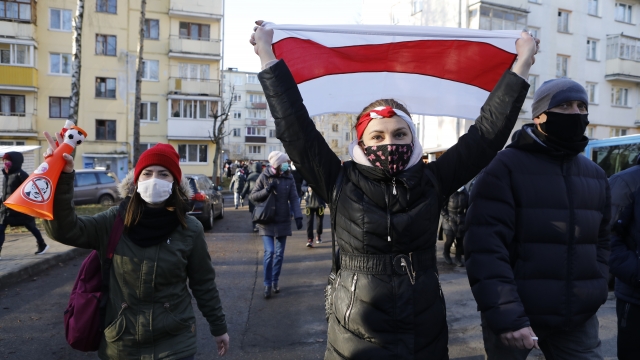 On Sunday, more than 300 protesters against the Belarusian president were detained in Minsk after defying a law against demonstrations.

Thousands turned out for the 18th consecutive weekend of protests in Belarus demanding the resignation of President Alexander Lukashenko.

On Sunday, more than 300 demonstrators were detained for violating a ban on protests while marching through the capital city of Minsk. Water cannons, armored vehicles and military trucks were seen throughout the city, while several subway stations were closed and internet access was restricted.

Protesters say the country's presidential election in August — which Lukashenko was named the winner by a landslide — was rigged. The Russia-backed Lukashenko continues to stand by the legitimacy of his re-election as the leader of the eastern European nation he has controlled for the last 26 years. But there were signs that things might finally be changing.

State media reported weeks ago that Lukashenko could step down as president after a new constitution is adopted.

On Friday, a United Nations Commissioner for Human Rights said  Lukashenko needed to end what she called "ongoing human rights violations" after reports of excessive force with detainees.

An estimated 27,000 people have been arrested since the presidential election.