Fire Ants Can Build Roiling Ant Towers To Get Around 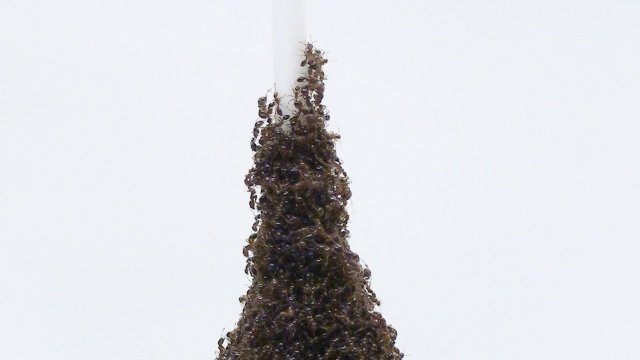 New time-lapse footage shows how ants can get around by using their own bodies to build moving towers.

Ants don't just build complicated nests. They'll use their own bodies to make things, too. Researchers at Georgia Tech University are studying how the insects link together to make ant rafts and ant bridges. Now, they've accidentally found that fire ants can also get around by using themselves to constantly build and rebuild a moving tower.

Researchers filmed fire ants climbing on top of each other and left the cameras rolling. When they watched the sped-up footage, they found the ant structure sinks under its own weight, so the insects constantly renewed the tower until they went where they wanted to go.

They fed ants radioactive food and watched them build towers in an X-ray machine so they could watch the interior of the tower sink as it grew. Ants that got pushed to the bottom eventually disengaged and started climbing again.

Behavior like this serves a purpose: Fire ants in their natural habitat in Brazil have to deal with frequent flooding. Rafts and towers are a way to escape water and relocate to a new home.

Ants Have Been Running Sophisticated Farms For 30 Million Years

Some ants domesticated their food sources millions of years before humans ever started planting wheat or soybeans.

It's worked so well it's kept ants alive for millions of years all over the world — and in Georgia Tech's buildings, where they've been known to escape labs and set up camps under staffers' desks.

And designs based in biology could make our own construction more efficient. Scientists think ant building-techniques — like this replenishing trick — could be useful for self-assembling robots in the future.