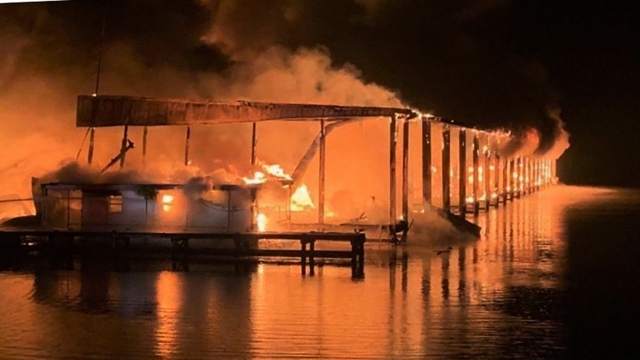 Officials told The Associated Press that the death toll may still rise, since they aren't sure how many people were on the boats.

At least eight people are dead following a dock fire Monday morning along the Tennessee River in Alabama. An estimated 35 boats were destroyed.

Scottsboro Fire Chief Gene Necklaus confirmed the eight deaths and said "that number could go up because we don't know how many were on the boats."

The fire was reported shortly after midnight at a covered dock in Jackson County Park, which is home to numerous houseboats.

Jackson County Chief Sheriff's Deputy Rocky Harnen told AP: "There were numerous people rescued from the water who had escaped. We have some confirmed fatalities, but we don't have an exact number yet."

Seven people have been hospitalized for burns and potential hypothermia, but they are reportedly in stable condition.

A witness said most of the boats that burned had people living in them year-round, and officials are still searching for victims.

Dive teams are expected to search the waters since numerous boats drifted away from the dock and sank. The cause of the fire is under investigation.