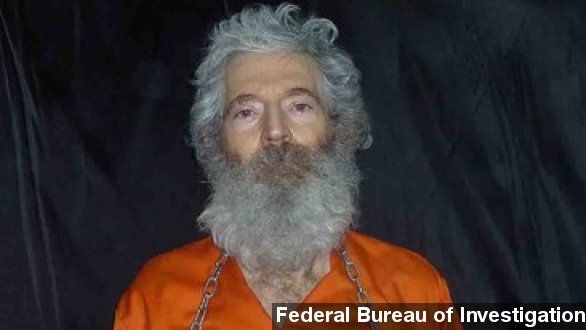 Robert Levinson went missing in Iran seven years ago. A new report claims he vanished while working for the CIA.

Retired FBI agent Robert Levinson went missing in 2007 during a business trip to Iran, and his family has been pleading for his safe return ever since. But an Associated Press report published Thursday sheds some light on the real reason Levinson went to Iran in the first place, and exposes a serious blunder at the CIA.

Levinson was last seen in this video and a handful of photographs dated from 2010-11. The FBI says the former government contractor disappeared while working as a private investigator, and has offered a $1 million reward for information leading to his release. (Via YouTube / HelpBob Levinson, FBI)

U.S. intelligence officials have long suspected Iran's government of holding Levinson captive. Several official appeals have been made to the Iranians for information about Levinson's whereabouts.

"He is an American who has disappeared. We have no news of him. We do not know where he is."

Now, an AP investigation co-published in The Washington Post shows why Iran might be reticent about Levinson: he was actually in the country on an unauthorized CIA mission, contracted by a CIA official to gather intelligence.

Revelations about Levinson's mission caused a scandal within the CIA. Seven analysts were disciplined and three were forced out of their jobs after an internal investigation. The agency also reportedly paid $2.5 million to Levinson's family in order to avoid a lawsuit.

State officials also asked the AP to delay publishing the report three times since 2010. A spokeswoman for the National Security Council told the press, "The White House and others in the US government strongly urged the AP not to run this story out of concern for Mr Levinson’s life. ... We regret that the AP would choose to run a story that does nothing to further the cause of bringing him home." (Via The Guardian)

But the AP defends their decision to publish now, saying the revelations are unlikely to harm Levinson's chances of returning home. Business Insider notes, "Levinson was not trained to resist interrogation and very likely told his captors about CIA involvement, especially if he was subjected to mental and physical abuse."

And a CBS reporter argues the story might actually help Levinson's family secure his release.

"The family has more leverage now to say to the U.S. government, 'Now it's out there, he was somebody working for the U.S. government on a project. It's time to step up and put more pressure on Iran because he was really one of ours.'"

Levinson is one of three Americans currently believed to be in the custody of the Iranian government.