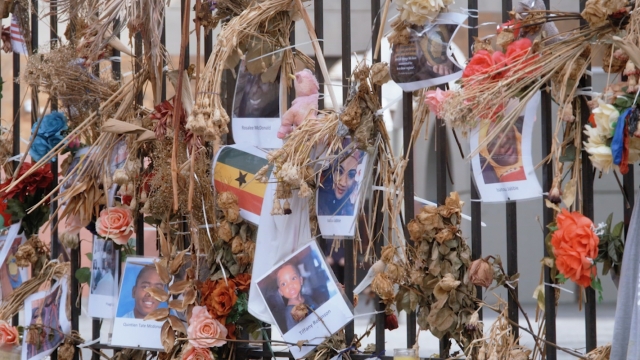 Newsy investigated whether a New York apartment building was in compliance with safety requirements months after a deadly fire in the Bronx.

"We were all five of us in this room, and this is the little garbage pail that we had, and we had a box of surgical masks that we kept putting on and taking off because it kept getting full or black," said Ramos.

Ramos and her family survived one of the deadliest fires in New York City within the last three decades.

"So I heard the alarm and I'm like, oh, I guess there's a fire in the building, which is something that's normal because the alarm always goes off," said Ramos.

But this was anything but normal. 17 people, including 8 children, died in this Bronx building, and many more were gravely injured.

Fire marshalls cite an electrical heater on a 3rd floor duplex of the building as the cause of the fire. And a faulty door at fault for the lives lost that January day.

Ramos and her family were trapped in their 15th floor apartment for over three hours until they were rescued. Their next-door neighbors did not make it out alive.

"All you’re thinking is, are you next? Because then you don't hear the screaming anymore," she continued.

NYC Fire Commissioner Daniel Nigro says that the self closing doors to the duplex and on the 15th floor stairwell malfunctioned and did not close as they’re supposed to, allowing the smoke to spread.

Haydee Villanueva lives and works in the Bronx. As a Community Action for Safe Apartments (CASA) Leader, she's trying to help tenants understand their rights.

"This is what the self-closing door looks like. It means that if I was leaving my apartment, the door should close behind me on its own," she said. "These doors should not be open. They're supposed to help separate, in case the fire breaks out on this side of the building, compared to that side of the building."

In 2019, this building was sold to a consortium of investors called Bronx Park Phase III Preservation LLC.

On the day of the fire, 32 residents were there through a federally-funded housing voucher called Section 8, which provides assistance to low-income families to rent housing in the private market.

"The only time they come to really fix the apartment is when Section 8 is coming to the check the inspection, so they want to make sure that alarms and everything is working, that nothing needs to be done," Ramos said. "That's the only time they're really in your apartment."

Newsy reached out to the LLC for comment about the door maintenance. They said at the time of the fire there were no active maintenance requests or federal housing violations for self-closing doors.

However, some residents of Twin Parks tell a different story.

"My door didn't close behind me," Ramos continued. "Now they close. Now they're fixing all the doors to make sure that they close behind."

Eliot Hetterly, from The Association for Neighborhood & Housing Development, a NYC based housing coalition, says affordable housing is seen as a lucrative option for investors because they’re able to maintain cheap operation costs through various government programs.

"Affordable housing is increasingly being seen by investors as what's called a stable asset class," he said. "There's also a steady rental stream from housing vouchers that guarantee that rents are going to be paid month after month because the tenants only have to pay a small portion and the rest of that gap is covered by the housing voucher."

Data from the New York City Department of Housing Preservation and Development shows that the Bronx building has a history of complaints and violations prior to the fire.

There were 38 complaints against the building from 2020-2021. These included complaints about pest control, mold, plumbing and electrical issues and — in December 2021 — a self-closing door.

Notes in Preservation and Development Housing records claim the department contacted the tenant and confirmed the door had been fixed.

Unfortunately, it was not the only door in the building that was broken.

In the case of this Bronx building, smoke escaped through two doors that failed to close automatically. According to New York City's chief medical examiner, all 17 victims died from smoke inhalation.

Samantha Kattan, a senior research analyst for housing at the Action Center on Race and the Economy, says the incentives for landlords to make repairs is low because city fines are not high enough for them to really impact their business practices.

"The majority of affordable housing in this country is owned by private landlords. A lot of times its larger corporations," said Kattan. "When we have this flow of institutional money into the housing sector, tenants are always negatively impacted, whether it be through higher rents or repairs being neglected."

NEWSY'S AXEL TURCIOS: Do you think this fire could have been prevented?

The scent of the smoke is still so heavy you could feel it, it's very uncomfortable to be here. The building management had to set up these two huge air purifiers, but Ramos says they are not enough to contain the smell of the smoke.

Civil Rights and Personal Injury Attorney Ben Crump has filed lawsuits on behalf of the families impacted by the deadly fire.  The lawsuits allege negligence by the building as the leading cause of deaths, and injuries to the surviving family members.

The Ramos family says they were among the first to rent in the Twin Parks Northwest Complex when it was built in 1972. At the time, Twin Parks won awards for its architectural design.

"It's taken me a while to actually get used to sleeping again and just, you know, to deal," said Ramos.