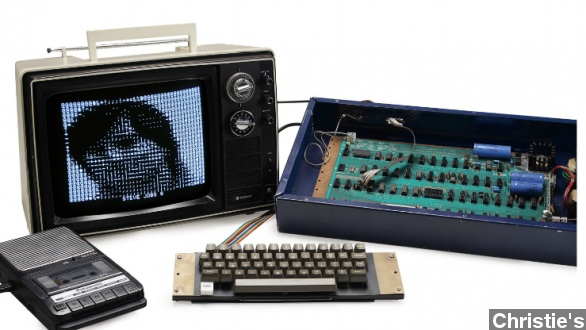 The rare, fully functional machine went to an anonymous buyer. Steve Jobs himself sold it in 1976 to Charles Ricketts for $600.

You’re looking at an Apple-1 personal computer Steve Jobs directly sold from his parents’ garage in 1976.

Back when reporters had to say things like this: “Apple the computer, not the fruit.”

It might not look like much now, but it just sold at auction at Christie’s for $365,000 to an anonymous buyer.

Big bucks, but auctioneers actually expected the rare, fully functional machine to go for around half a million. Most estimates suggest there are fewer than 50 Apple-1 personal computers in existence today. (Video via CBS)

But of course — this one was special because Steve Jobs himself sold it. The Ricketts Apple-1 computer is named for its original owner — Charles Ricketts — who first bought it from Jobs for $600. (Video via ODN)

Steve Wozniak hand-made the Apple-1 with Jobs, who famously financed the build by selling his van. (Video via PBS)

Apple’s tech has — of course — come a really long way since 1976. The sleek design and intuitive functionality you know today stands in pretty stark contrast to the briefcase-sized Apple-1.

While the auction house admits it’s disappointed the rare machine went for less than expected, they could probably take solace in this: You can buy almost 1,500 iPad Minis for the same price. (Video via KTVT)

This video includes music from Kevin MacLeod / CC BY 3.0.