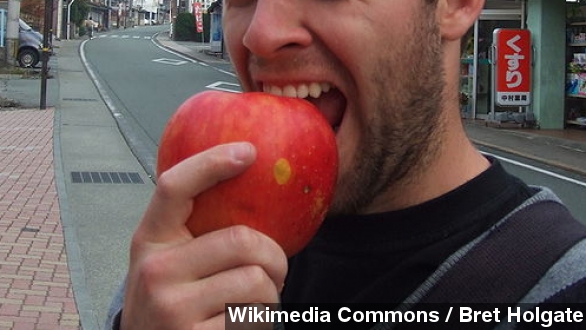 A study suggests apples are more effective than statins against heart disease. But they're also more expensive.

Ever heard this saying, "An apple a day keeps the heart attacks and strokes away"? Maybe not, but new research shows it's true.

​"Researchers at the University of Oxford say that's similar to giving the cholesterol-lowering drug statins to everyone over 50 who's not already taking them." (Via BBC)

Researchers in the U.K. compared the effects of daily apples to statins in 17 million candidates. They found if everyone in Britain ate an apple a day, it could save 8,500 lives a year — compared to the 9,400 with statins. (Via KPHO)

And the up side: Apples don't have any side effects. "Choosing apples rather than statins may avoid more than a thousand excess cases of myopathy and more than 12,000 excess diabetes diagnoses." (Via The Telegraph)

So why is it that an apple a day actually does keep the doctor away?

They contain "heart-healthy compounds that combine to make it an under-the-radar superfruit." Compounds like pectin, quercetin and phytochemicals. Doctors say the best thing to do is combine apples with statins. (Via Everyday Health)

The only downside to the findings — apples are actually more expensive than the medication. But when you consider the side effects, they might be worth it.