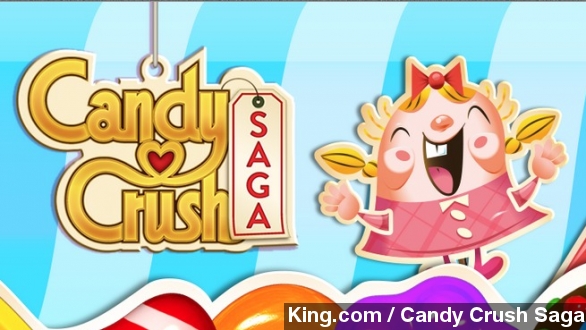 iOS users collectively enjoyed a sugar rush in 2013, as Apple announced this week Candy Crush Saga was the most downloaded free app in its best-of lists for this year.

The candy switching, match-three puzzle game took the world by storm as users worked their way through level after level of sweet-themed challenges with the emotional little Tiffi and Mr. Toffee — two of the game's recurring characters. (Via QVC, King.com)

Although Apple didn't release specific download figures, Candy Crush was also the top grossing app on iPad and iPhone. Mashable calls that an impressive feat considering the app is free and relies on in-app purchases.

Like extra lives when you don't want to wait 30 minutes... Don't act like you don't know what I'm talking about.

According to The Guardian, the game has been "downloaded more than 500 million times on mobile devices, and played 150 billion times across the web, Facebook and mobile."

The co-founder of the game's publisher, King, told the paper, "The truth in the industry at that stage was that casual games could never be the top game ... We disproved that by making a game that hit the top and kept growing."

Candy Crush's dominance wasn't the only big reveal from Apple's year-end list. A writer for USA Today says one major takeaway was the popularity of communication apps.

The Twitter-owned Vine, Snapchat and Instagram all made the top-10 list — in that order — as users continued to find new and unique ways to share every detail of their lives with others.

But with new apps making it to the top, some of last year's hot apps got bumped out of the spotlight — like Temple Run and Draw Something, the app that allowed you to see which of your friends were most artisticly challenged. (Via Zynga)

Top-10 is awesome, but Apple also endorsed two apps as their top choices for 2013.

Disney Interactive got the nod for iPad app of the year. The $10 app gives users a behind-the-scenes look at the Disney's vast cartoon library and how some of your favorite Disney movies are brought to life.

If only there was a way to put Candy Crush and Duolingo together. On second thought, maybe not.