Apple Pay Takes Off With JetBlue 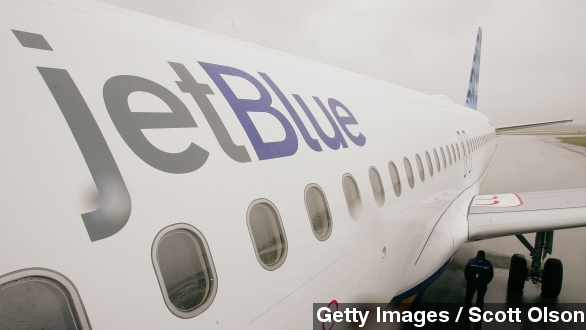 JetBlue will be the first airline to accept Apple Pay transactions in the air when it launches the service on select flights in mid-February.

iPhone 6 and 6 Plus users will soon be able to use their high-tech gadgetry to purchase food, drinks and other amenities on JetBlue flights without having to dig into their pockets for their credit card.

The airline announced it will begin accepting Apple Pay payments on select flights starting next week.

USA Today columnist Ed Baig received a pre-launch demonstration of the process. The airline is outfitting its staff with these special iPad minis that accept Apple Pay as well as credit cards.

The theory is people generally hang onto their phones during flights, while their wallet might be tucked away in a carry-on. So this should be smoother and more efficient for customers and flight attendants alike.

One big question we had: How can you make a payment if your phone is supposed to be in Airplane Mode? JetBlue says you don’t need Wi-Fi to make a payment. So how does it work?

Well, according to CNET all of your payment information is already stored on a chip inside your phone, so "your iPhone doesn't need to contact anyone since all the info is onboard."

The service will also be available on the Apple Watch, which is expected to go on sale in April.

And JetBlue's VP of inflight experience told USA Today it will be compatible with Google Wallet and other mobile payment systems down the road.

Apple already has a huge head start on those other systems. In January, CEO Tim Cook claimed Apple Pay already accounts for two out of every three dollars spent using contactless payment devices.

Perhaps it's a good thing this wasn't around when SkyMall was in its heyday. It would have been far too easy to drop two grand on a life-size Yeti statue.

The Apple Pay service will initially only be available on transcontinental flights from New York’s JFK to Los Angeles and San Francisco in mid-February, with the complete roll-out expected by June.