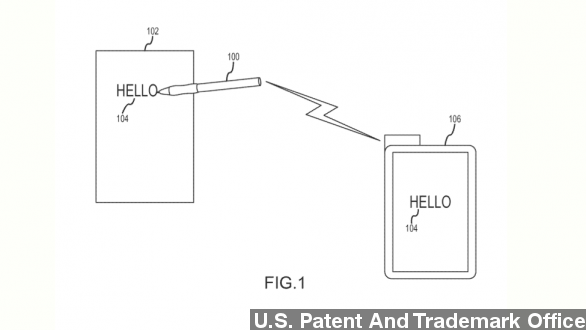 On Tuesday Apple was granted a patent for what it calls a "communicating stylus," or essentially a smart pen. But will Apple actually make it?

Apple has been granted a patent for a "smart" pen — or stylus — which, considering some of the more "out-there" Apple patents, is actually pretty normal.

The U.S. Patent and Trademark Office released the patent on Tuesday, and it gives us all of Apple's descriptions of just how the pen is supposed to tick.

The idea here is that Apple would use multiple accelerometers to detect when the pen is in use and then either transmit the movements directly to a connected Apple device or store the movement data within the device itself for later use.

Of course, neither of those would be entirely unique to Apple. Livescribe has been out for a few years now and transcribes notes to a tablet when used on special paper.

Another smart pen, the N2, was funded on Kickstarter back in October for almost $300,000. Unlike the Livescribe, which uses infrared to track writing, the N2 uses a mounted camera sensor.

But by using accelerometers to record the pen's movements, Apple says its stylus will be able to record what someone writes on any surface, anywhere and in three dimensions. So theoretically, that means it could write in midair.

Right, so now the question is ... does Apple actually plan to build this stylus? Well, Steve Jobs certainly wasn't a big fan of them, at least not as a primary input method. (Video via Apple)

"How are we going to communicate this, we don't want to carry around a mouse, right? So what are we going to do? Oh, a stylus, right? We're going to use a stylus. No," Steve Jobs said while introducing the iPhone in 2007.

But so far, Apple has filed at least 32 stylus patents in its history. So it's definitely probing the idea of using one, if not simply as an accessory. This latest patent was originally filed four years ago.

As Mashable points out, there are rumors of an iPad Air 2 with a larger screen possibly slated for 2015, which could give credence to Apple working on a stylus as an accessory.

But for now, there's no way of knowing whether Apple actually plans to dabble in the realm of styluses — or even if it has the technology to pull off a "write anywhere" stylus.

This video includes images from Getty Images and Apple.