Apple Takes Down Apps Made In Iran Because Of US Sanctions 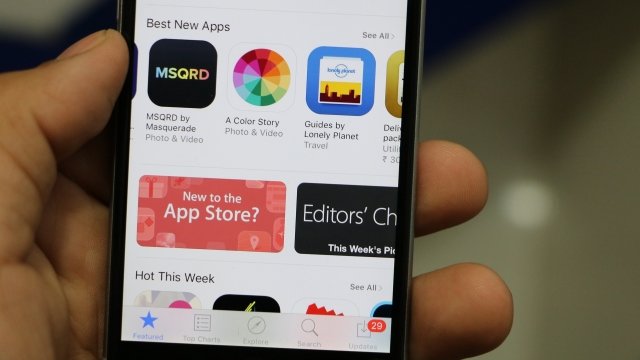 The removed apps have no way of getting back into the App Store unless restrictions change or developers get permission from the Treasury Department.

This month, Apple began removing Iranian-made apps from its app store. The company cited U.S. sanctions against the country for its decision.

Developers told Bloomberg they received no warning about the removals. Some tried to appeal the decision, but Apple didn't budge.

Most of the removed apps — of which there are at least a dozen — were based and focused mainly in Iran. They include a meal delivery startup, online stores and a popular Iranian ride-hailing app.

Snapp, which has been dubbed "The Iranian Uber," was one of the apps removed by Apple. It launched in 2014, and ironically, it was because of U.S. sanctions that Uber was locked out of Iran and allowed Snapp to thrive.

As of July, Snapp reported having eighty percent of Iran's ride-share market. It's unclear how Apple's move will affect the company, but it's worth noting that Apple devices reportedly comprise just eleven percent of the Iranian cellphone market. Meanwhile, Iranian apps are still safe on the Google Play Store as long as they're free.

In regard to the decision, Apple told developers "the App Store cannot host, distribute or do business with apps or developers connected to certain U.S. embargoed countries."

Technically, Apple doesn't even have an App Store in the country, and iPhones are officially banned from being sold there in the first place. The smartphones instead make their way into the country via smugglers.

The company also said Iranian apps could be let back in if they obtained permission from the U.S. Office of Foreign Assets Control. Otherwise, developers would have to wait for the restrictions to change.