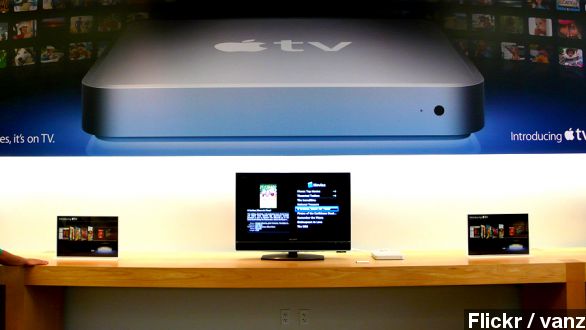 'Downton Abbey' episodes will be available on a limited basis despite Amazon's acquisition of exclusive streaming rights.

Apple TV appears to be beefing up its lineup. The additions of Yahoo! Screen and PBS add considerable content to the service.

The PBS app on Apple TV offers more than 5,000 hours of video from the likes of "Frontline," "Austin City Limits" and others. But what about "Downton Abbey?" (Via CNET)

Amazon acquired the streaming rights to "Downton Abbey" earlier this year. The show was previously available to stream on Netflix, before moving exclusively to Amazon Prime.

Because of that deal, early reports about Apple TV adding PBS indicated "Downton" wouldn't come with the package.

But AllThingsD's Peter Kafka reports PBS will make episodes from seasons 2 and 3 available in December. And season 4 episodes will be available in January "for a limited window following the on-air broadcast."

It could mark another content coup in the video-on-demand world — following June's addition of HBO Go to Apple TV. (Via HBO / "Game of Thrones")

The Verge's Ellis Hamburger writes "Apple TV's content story gets a little more compelling" with Yahoo! and PBS on board. He notes other recent additions like Disney, ESPNews and The Weather Channel.

In the past week, Apple TV competitor Roku has announced the addition of some live TV partners — namely Disney and ESPN. (Via TechCrunch)

Roku also struck a deal with SlingMedia to allow its SlingBox to stream video to Roku players. (Via Mashable)

Also playing catch-up — Google's Chromecast — which is rumored to be adding HBO Go soon. According to GigaOM, a reference even appeared briefly on Chromecast's product page last week.

With gadget-shopping season in full swing, expect to see the set-top box battle heat up through the holidays.