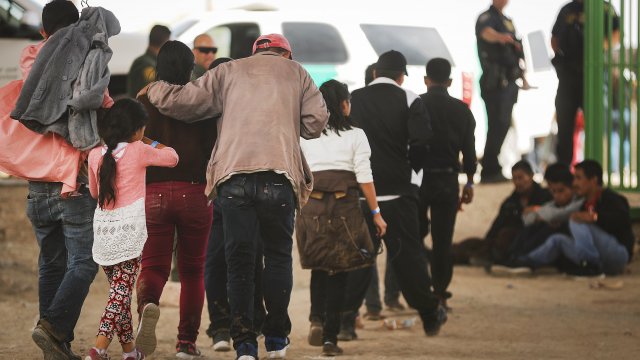 Apprehensions along the U.S.-Mexico border dropped 28 percent, according to the Department of Homeland Security.

Apprehensions along the U.S.- Mexico border fell 28 percent in June, according to new data from the Department of Homeland Security.

The department said it detained a little over 104,000 people last month. That's down from 144,000 in May. DHS said it saw a decrease across all migrant demographics, including unaccompanied minors, families and single adults.

There are a few factors that play a role in the decline. One is the weather. When the summer months roll around, there is typically a dip in apprehensions, according to U.S. Customs and Border Protection data.

However, DHS officials touted their policies as factors behind the drop. It pointed to the controversial Migrant Protection Protocols, which force asylum seekers to remain in Mexico while they wait for a hearing. The U.S. also praised the Mexican government for beefing up troop presence along Mexico's southern border. Mexican president Andres Manuel Lopez Obrador agreed to the troop deployment after President Trump threatened the country with tariffs on Mexican goods.

DHS also said it's working with El Salvador, Guatemala and Honduras to reduce human trafficking and the smuggling of illegal goods. Many of the migrants seeking asylum come from these countries, which are plagued with violence and economic instability.

Despite the drop, Acting Homeland Security Secretary Kevin McAleenan said there is still an ongoing "border security and humanitarian crisis." His department says there were more than 688,000 apprehensions between January and June of this year, which is 140% higher than the same time last year.