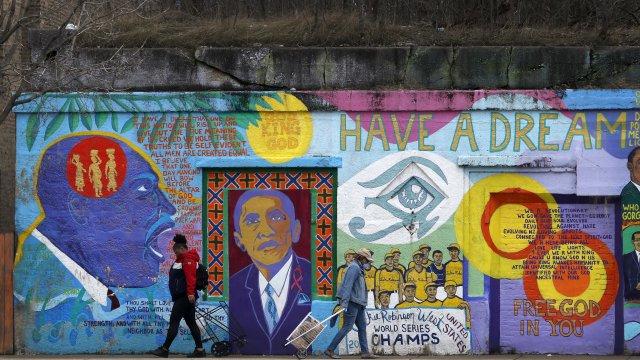 Are black men most at risk of dying from the coronavirus?

Some say COVID-19 is a great equalizer, striking without regard to sex, race or economic status. But emerging research suggests that is not the case. International statistics clearly show men are more likely to die of COVID-19 than women. That trend's playing out in New York City as well, where COVID-19 is twice as deadly for men. And when it comes to race, a clear pattern is unfolding.

Dr. Anthony Fauci, director of the National Institute of Allergy and Infectious Diseases, said: "When you look at the predisposing conditions that lead to a bad outcome with coronavirus — the things that get people into ICUs that require intubation and often lead to death, they are just those very comorbidities that are, unfortunately, disproportionately prevalent in the African American population."

The racial disparity is clearly evident in state-level data from the Washington Post:  In Illinois, Black Americans make up just 14% of the population, yet 42% of people who have died from the virus are black. Similarly, in Michigan black people make up 14% of the population but account for 41% of deaths. But infectious disease expert Dr. Emily Landon says the poor outcomes for African Americans may well be related to socioeconomic status rather than just race.

Protecting The Power Grid Through Covid-19

There are cyberattacks, financial fears for the industry, and workers who are sequestering at facilities to keep New York's power grid running.

Landon: "In the United States, unfortunately, sometimes race and reduced socioeconomic status run together. And none of us like to see that. But that's a problem that we haven't been able to solve in America. ... So men versus women looks like it holds true everywhere. … However, when it comes to the African American or black population, there are a lot of different things that could be at play here. ... And for years and years and years, some of our African American or black population has been underserved and under able to access care."

Connor Maxwell focuses on Race and Ethnicity at Center for American Progress. He says existing inequalities around all kinds of social circumstances have been highlighted by the pandemic.

Maxwell: "It's an issue with structural racism in general. ... For decades, the federal government could do these programs to expand access to housing in the suburbs, but excluded black communities and largely restricted them to densely populated urban areas. And now tens of millions of black Americans live in segregated communities where crowded grocery stores and laundromats, public transportation are part of a normal day. They're stuck in occupations that are public-facing where there's much less flexibility to work from home, much less pay, fewer benefits. All of these things make social distancing more difficult and increase exposure to coronavirus.

Barr said in a memo to the Bureau of Prisons Friday that facilities need to use more home confinement methods.

Landon: "We need to provide a little extra help for people in communities where they're more vulnerable. And that means older people, people in nursing homes, people in congregate living facilities. And now I think it's obvious that some of our more underserved populations are black Americans, African Americans."

Bryan Thompson from Wisconsin: "More locally and definitely in the African American community, we have been really hit hard. And I just know two people were right around my age who have been hospitalized and have made it through some tough periods."

And while researchers are still having to rely on anecdotal evidence and data from states that document the race of COVID-19 victims, the apparent dangers to the African American community in particular are already clear enough to raise the alarm.