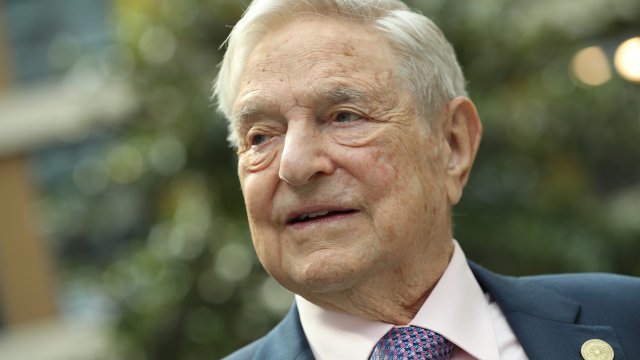 Soros haters have been casting the Jewish billionaire as a villain orchestrating every event they dislike. Are these conspiracies anti-Semitic?

Liberal philanthropist and billionaire George Soros has long been a favorite target of right-wing groups and Eastern European strongmen. That's in part because he donates frequently to Democratic candidates and progressive causes.

On Twitter and darker corners of the internet, Soros haters have been casting him for years as a villain orchestrating ... pretty much every event they dislike. But in recent months, President Donald Trump and other elected Republicans have increasingly joined in on the conspiracies. And that could set a dangerous precedent.

"Obviously, billionaires have power, whether it's George Soros, whether it's the Koch brothers — it's very clear that they have influence," said Aryeh Tuchman of the Anti-Defamation League. "When you get to conspiracy theorizing, that's when it degrades our democracy. It distracts from the actual issues at hand, and it whips up partisan fervor in a way that is really not helpful."

Tuchman studies extremism at the Anti-Defamation League, a nonprofit that fights against anti-Semitism and other forms of discrimination. He says there's an important distinction between correctly stating that Soros is an extremely influential progressive donor and claiming without evidence that he sways national events for perverse purposes.

"There is a fringe element of hardcore anti-Semites who have for many years characterized George Soros as the rich Jew who is manipulating world events, controlling the banks, Hollywood, other organizations, potentially even governments around the world for his own nefarious purposes. That is hardcore anti-Semitism," Tuchman said.

Tuchman admits that a person who tweets a Soros conspiracy theory may not mean to promote anti-Semitism. But even then, Tuchman says, these theories could give ammunition to those disseminating the old and dangerous anti-Semitic idea that a group of powerful Jews work behind-the-scenes to manipulate global events.

"Any politician or any public figure who uses anti-Soros conspiracy theories, even if they are not overly anti-Semitic, creates that effect of laying the groundwork for the dissemination of actual anti-Semitism into a population that may not have had a vulnerability to it before," Tuchman said.

He added: "What people need to understand is the history of the anti-Semitic stereotype and the danger that anti-Semitism has posed to Jews, you know, for hundreds of years, and to recognize that disseminating even non-anti-Semitic conspiracy theories about Soros is potentially reinforcing the anti-Semitic ideas about George Soros."