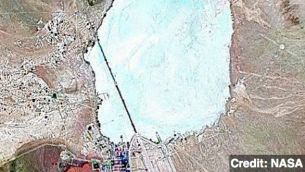 Newly declassified documents show the CIA acknowledging the existence of Area 51 in Nevada.

The truth is out there, and the CIA is fessing up.

Newly declassified documents show the CIA acknowledging the existence of Area 51 in Nevada, including a map putting it about 125 miles north of Vegas. (Map via National Security Archive at GWU)

To be clear, all those documents really did was confirm it’s there, and that it had been used as a government testing site for the CIA’s first spy planes from the Cold War.

No mention of the conspiracy theories about alien autopsies, or any other extraterrestrial ideas surrounding the area. (Via ITN)

We’ve heard cursory acknowledgments of Area 51’s existence before, but this is the first time we’ve seen specifics about U-2 spy plane testing.

The 407-page document gives details like the rather mundane history of how the site was selected for testing and how it came to be named.

George Washington University’s National Security Archive published it all in a report called “The Secret History of the U-2.

And the suggestion is that those “UFO sightings” people thought they had at the time were really the spy planes. According to those documents, the first test flight took place in August of 1955.