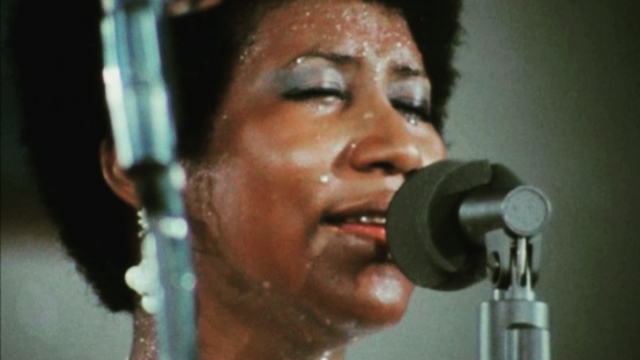 Aretha Franklin's 1972 "Amazing Grace" concert is a testament to the gospel music community.

"She can sing anything. Anything! My sister: Miss Aretha Franklin."

What you're seeing and hearing is Aretha Franklin's 1972 live recording of "Amazing Grace," one of her best-selling albums of all time.

The long-shelved concert film feels almost like a time capsule from that era of Franklin's career, but because of technical issues involving unsynchronized sound, the film wasn't ready for release until 2018 — more than 40 years after Franklin's performance.

"What was it like hearing that the movie would finally be edited and released to the public?"

"It's super incredible, not just to see it finally out so the public can experience that great experience I had, but also to be seeing it in theaters with great sound systems."

That's Aaron Cohen — the music journalist who literally wrote the book on "Amazing Grace" and watched the edited concert footage years before it was finished.

"As many times as I've seen the film, to hear it on a great theater sound system and to hear the nuances of not just Aretha Franklin's phrasing, but Cornell Dupree's guitar lines, the cadences of James Cleveland speaking — which is another reason why I recommend people see the film many times, is because these many nuances come across if you see the film many times."

Those nuances can be heard on the album itself, but to see those details as they happen on screen adds to the energy of the production as a whole.

To better explain what we mean, listen to this audio clip by itself. ["A wretch like me..."]

Now, see the difference when you add the footage from the film. ["A wretch like me..."]

The cheers of the congregation are more emphasized, and Franklin's band is given more weight. You can see clearly why Franklin chose to record her album in a church rather than a studio.

Cohen notes that around the same time Franklin's performance was recorded, other concert films like "Woodstock" and "Wattstax" premiered to celebrate their respective music communities.

Today, "Amazing Grace" is following that tradition — offering testament not only to the iconic career of Aretha Franklin, but to her roots in the gospel community as a whole.