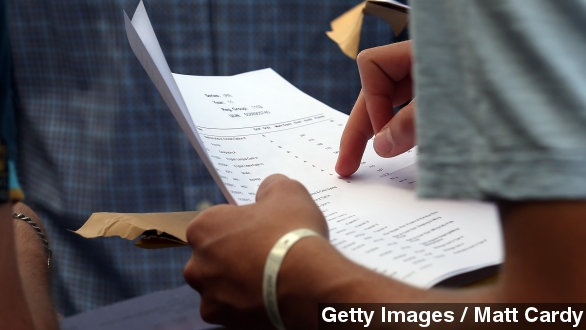 On Thursday, Arizona state lawmakers OK'd a law that requires high school students to pass a civics test, based on the U.S. citizenship test.

Pop quiz time: Who's in charge of the U.S. executive branch? What's the reason the U.S. flag has 50 stars? How many U.S. senators are there?

Come 2017, high school students throughout Arizona will need to know the answers to those questions and more.

That's because on Thursday, state lawmakers OK'd a law requiring students to pass a civics test before they can graduate. (Video via KSAZ)

It's called the American Civics Act, and to Arizona's newly sworn in Republican Gov. Doug Ducey, it's an insurance policy for politics down the road.

Ducey said this during Arizona's state of the state address Monday: "These are our children, and not long from now, it will be for them to vote on who sits in your chairs and who stands at this podium. How can we expect them to protect the principles on which this country was founded, if we are not preparing them for that task right now?" (Video via KAET)

The idea is if an Arizona student can answer 60 questions correctly on a 100-question test based off the U.S.’s citizenship test, they’re more prepared to exercise their civic duties.

The act is part of a wider push by the Arizona-based Joe Foss Institute, which is attempting to get mandatory civics tests passed for all 50 states by 2017, the U.S. Constitution’s 230th anniversary.

The Foss Institute says some 15 other states are likely to OK civic-test acts similar to Arizona's in 2015. North Dakota has already fast-tracked its own version of the act through its House.

But not everyone thinks a civics test is as crucial as the Foss Institution and Gov. Ducey seem to make it out to be, including some of the few Democrats in Arizona's legislature.

"Why wait another 21 years to just repeal the civics examination because it’s just going to become another fiasco such as AIMS?" said Arizona Sen. Ed Ableser.

And a columnist for The Arizona Republic, Laurie Roberts, questions the value of the test, writing, "If we really must add yet another test to the gauntlet through which seniors must run to get their diploma, how about one that actually stimulates thought rather than rote memorization?"

This video includes an image from Getty Images and music from Bensound / CC BY ND 3.0.