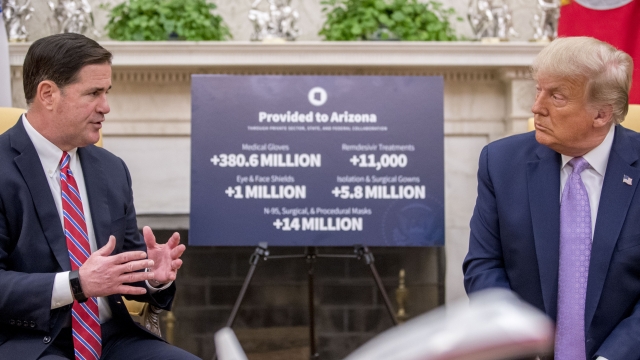 Arizona is recording a drop in reported COVID-19 cases, but doctors warn that could change is people ignore safety measures.

After starting reopening efforts earlier this summer, Arizona found itself forced back onto its heels amid a surge of the coronavirus in June. But Gov. Doug Ducey says that is no longer the case.

"We're going to continue to take whatever steps are necessary to protect lives and prioritize public health in the state of Arizona," Ducey said.

Health officials say more than 180,000 cases of the virus have been confirmed in the state, as well as roughly 4,000 virus related deaths. But the state reported numbers Sunday that represented a 10% drop in its seven-day average, according to a CNBC analysis.

"Everything that we're doing, all the steps that we've taken, is to reduce the spread, reduce the hospitalizations and reduce the deaths," Ducey said.

While in D.C. with President Trump to discuss the pandemic, Ducey credited the administration, in part, for the decline in cases the state is seeing.

"President Trump and Vice President Mike Pence and the coronavirus Task Force have been great partners to Arizona. We have a path forward. Every time we've needed something in terms of PPP, more ventilators, dollars for our tribal nations, Remdesivir, surge testing, they've been there and they've been there with a sense of urgency," Ducey said.

But while the state is seeing some promising signs — especially following rollbacks on reopening efforts for bars and restaurants — health experts warn that the situation could quickly escalate again.

"I don't want to say the worst is behind us because we've already kind of proven if we become complacent, if we fall off our guard a little bit, we're going to have a big problem," physician Dr. Matthew Heinz said.

But for now, beds are beginning to open up in ICU's.

Ducey is pushing for schools to open August 17, and educators and lawmakers are clashing on whether or not it is safe to do so.

"Parents will have a safe place for children to go if they so choose. That is inside the school. But in terms of in-classroom instruction, we're leaving that to the local superintendent, the local principal," Ducey said.