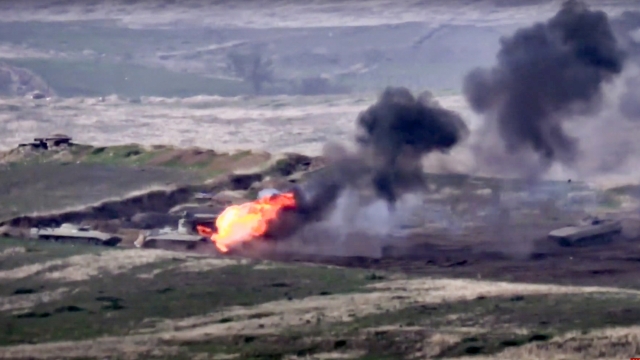 A 1,700-square-mile disputed province of Nagorno-Karabakh includes two oil and gas pipelines and has been a point of contention for decades.

Violence erupted between Armenian and Azerbaijani soldiers Sunday, with each side blaming the other for provoking the fights. The conflict quickly escalated, with tanks and helicopters along the mountainous border and at least 16 people killed. More than 100 were wounded as of Sunday night.

Armenia claims Azerbaijan started the clash by launching missiles. In a tweet, the Armenian prime minister said his country responded by destroying three tanks and shooting down two helicopters and three unmanned aircraft.

The tension is over the disputed province Nagorno-Karabakh. The 1,700-square-mile range includes two oil and gas pipelines and has been a point of contention for decades, even sparking a war in the early 90's. Until now, there hasn't been major conflict between the two since 2016.

Neighboring Iran called for an end to the conflict and said it is willing to help establish a ceasefire. Turkey — which shares a border with Armenia — promised full support to Azerbaijan.

NATO official James Appathurai called for the fighting to stop, saying in a prepared statement:

"The sides should immediately cease hostilities, which have already caused civilian casualties. There is no military solution to this conflict. The parties should resume negotiations towards a peaceful resolution."