Armenia, Azerbaijan Accuse Each Other Of Breaking Ceasefire 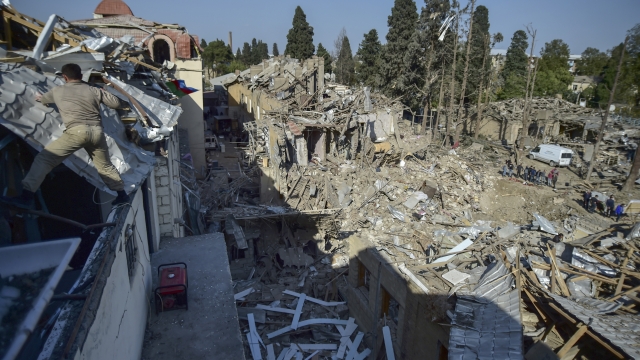 There's increasing worry that neighbors Russia and Turkey could become involved in the conflict.

Armenia and Azerbaijan are accusing each other of breaking a ceasefire the two nations agreed to over the weekend.

And there's increasing worry that neighbors Russia and Turkey could become involved in the conflict.

Russia has a pact with Armenia, while Turkey sides with Azerbaijan.

"Civilians are dying or are suffering life changing injuries. Homes, businesses and once busy streets are being reduced to rubble," Martin Schüepp, the Eurasia regional director for the International Committee of the Red Cross, said.

The international committee of the Red Cross is urging for peace.

You can see here the aftermath of shelling in the disputed territory of Nagorno Karabakh.

The region is recognized as part of Azerbaijan but governed by Armenians.

More than 500 people have died since fighting between the two countries broke out last month.

It's the worst tensions have been since the early 1990s, when a war in the region killed some 30,000 people.