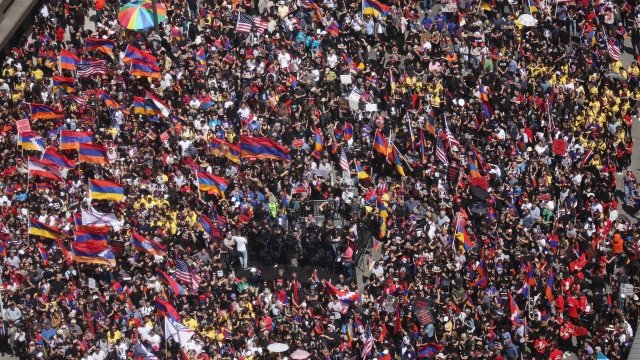 During and after World War I, Ottoman Turks rounded up and eventually killed an estimated 1.5 million Armenians.

On the heels of a political shake-up in the country, Armenians commemorated a massacre of their people on Tuesday.

During and after World War I, Ottoman Turks rounded up and eventually killed an estimated 1.5 million Armenians. Many historians consider it the first genocide of the 20th century. Turkey opposes that definition, and many countries, including the U.S., haven't labeled the massacre as a genocide.

The largest Armenian population outside its borders exists near Hollywood. There was also a large demonstration in California's "Little Armenia" on Tuesday.

But this year's demonstrations had another element to them. Recent protests led to the resignation of Armenia's prime minister, an ally of Russia and considered to be corrupt.

The opposition is dominated by younger Armenians. But there's a question as to whether what's happening is a full-fledged revolution. The acting prime minister also has ties to Russia. Moscow has denied claims Armenia will go the way of Ukraine and reject the Kremlin completely.