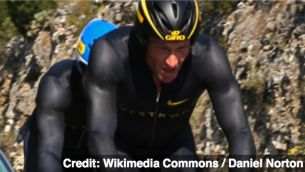 The interview published in French newspaper Le Monde puts a dark cloud over the Tour de France, usually a celebration of the sport.

It’s “impossible to win without doping.” Those were the words Lance Armstrong said the day before the Tour de France kicks off its centennial race on Saturday.

The interview, published in French newspaper Le Monde, hangs over what should be a celebration for the cycling sport. But as CBS puts it, Armstrong sure “knows how to rain on a parade,” reminding everyone of the sport’s doping past.

As you might expect, CNN reports his comments and the timing of them angered many involved in the sport.

“The president of the UCI, Pat McQuaid, has spoken out angrily about that very, very quickly today. He says Lance Armstrong is wrong and that the sport has changed.”

Amid the backlash, Armstrong was quick to point out his interview was referencing the cycling trends of the past and not now. He tweeted, “99-05. I was clear … on this. Today? I have no idea. I’m hopeful it’s possible.”

“He still considers himself the record holder for tour victories. Last year Armstrong was stripped of his titles after admitting to blood doping.” (Via News 12 New Jersey)

Armstrong was stripped of all seven of his Tour de France titles from 1999 to 2005. Despite his claims, McQuaid has said it is possible to move forward from the doping scandals and for someone to win the race clean.