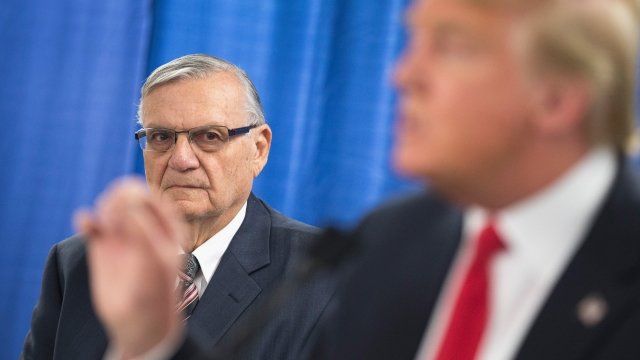 For now, Joe Arpaio still has a conviction without a punishment.

The former Maricopa County sheriff was convicted of criminal contempt in July but pardoned by President Donald Trump before sentencing.

The thing about presidential pardons, though, is it's still up to the court whether a conviction stands. Arpaio's team argued because there would be no punishment, the case was moot. A federal judge disagreed.

Trump's 'Drain The Swamp' Push Is All Clogged Up

The president is 1 for 5 on his pledges so far.

On Thursday, a U.S. district court judge in Arizona ruled Trump's pardon didn't change the fact that a court found Arpaio guilty, and because of that, she said Arpaio will keep that record.

Quoting an appeals court ruling, she wrote, "'The power to pardon is an executive prerogative of mercy, not of judicial record-keeping.' ... To vacate all rulings in this case would run afoul of this important distinction."

Arpaio's attorneys already filed an appeal. On the flip side, several liberal groups are trying to appeal Arpaio's pardon.