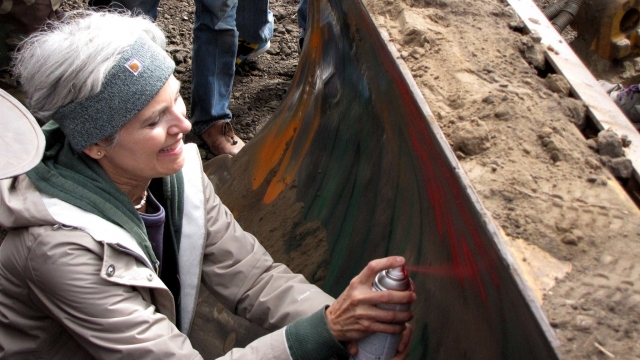 She and her running mate are charged with criminal trespassing and criminal mischief.

An arrest warrant has been issued in North Dakota for the Green Party's presidential candidate, Jill Stein, and her running mate.

Stein and Ajamu Baraka joined protesters of the Dakota Access Pipeline on Tuesday afternoon, and the presidential candidate took a can of red spray paint and wrote "I approve this message" on a bulldozer.

The Morton County Sheriff's Department opened a criminal investigation and charged Stein and Baraka with criminal trespassing and criminal mischief — both are misdemeanors.

Beyond the photos and video showing Stein's actions, investigators say they have video of Baraka painting the word "decolonization" on the front of a bulldozer.

Seemingly in response to the charges, Stein tweeted, "The Dakota Access Pipeline is vandalism on steroids."

Protests at a pipeline construction site began weeks ago. The $3.8 billion pipeline will run from North Dakota to Illinois, and part of its path will cross the Missouri River. That's the problem for these American Indian tribes who worry a leak in the pipeline would taint their only source of water.

The same day the Green Party duo visited the protest site, a federal judge ordered construction to temporarily stop at some of the pipeline construction sites.

The maximum sentence for a class B misdemeanor in North Dakota is 30 days in jail, a $1,500 fine or both.