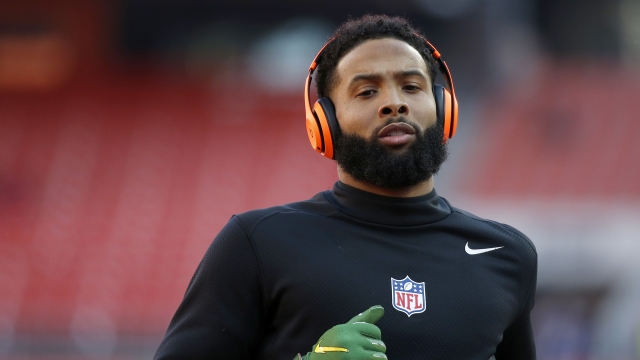 Two videos of Cleveland Browns player Odell Beckham Jr. were shared widely on social media this week — and one has him in legal trouble.

The NFL wide receiver was in Louisiana on Monday night to watch LSU's game against Clemson in the NCAA championship.

On Thursday, New Orleans police issued an arrest warrant for Beckham, accusing him of simple battery. The warrant is connected to a video that seems to show Beckham slapping a male security guard's backside in a Mercedes-Benz Superdome locker room after the game.

The Cleveland Browns released a statement on Twitter, saying: "We are aware of the incident and have been in touch with Odell and his representatives on the matter. They are cooperating with the proper authorities to appropriately address the situation."

Beckham grew up in New Orleans and played for LSU before heading to the NFL.

In a separate incident after LSU's Monday night win, multiple outlets report Beckham was seen in a video handing cash to LSU players, which may have been against NCAA rules. The bills were initially believed to be fake, but LSU later acknowledged the money was real and said in a statement that it's in contact with the NCAA and the SEC.