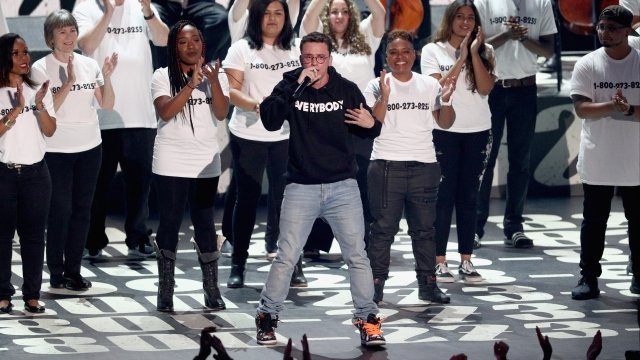 According to a study published last year, suicide rates reached their highest point in 30 years in 2014. Since 2016, organizations like the National Suicide Prevention Lifeline and the Crisis Text Line have seen several rises in traffic centered around current events.

Rapper Logic sparked one such traffic rise after he performed his song "1-800-273-8255" — the number for the National Suicide Prevention Lifeline — during the Video Music Awards. Suicide attempt survivors joined Logic on stage, wearing T-shirts with the phone number and the message, "You are not alone."

Crisis counselors recently noted an uptick in contacts last November because of the presidential election. The Crisis Text Line told CNN it received eight times the normal amount of texts between midnight and 1 a.m. after election night. And the Trevor Project, which focuses on LGBTQ youth, reported it received double the normal amount of calls for the same reason.

Did '13 Reasons Why' Really Have An Effect On Teen Suicide?

A new study examines the effect '13 Reasons Why' might have had on internet searches for suicide-related queries.

Advocates and other artists are working to combat suicide before it continues to spread. After Bennington's death, Linkin Park created a tribute page with suicide prevention resources. During the VMAs, fellow musician Jared Leto gave tribute to the two artists and told others considering suicide there is hope.

Even before Logic performed his song at the VMAs, NSPL Director John Draper told CNN the song's release resulted in the second-highest call volume in the group's history.

Logic's song is based on his experiences with mental illness, and artists Alessia Cara and Khalid joined the song to represent a crisis worker and caller, respectively. Draper said Logic's song is notable because it's "not focusing on tragedy or suicide. In fact, he's starting conversations about suicide prevention, as opposed to suicide."