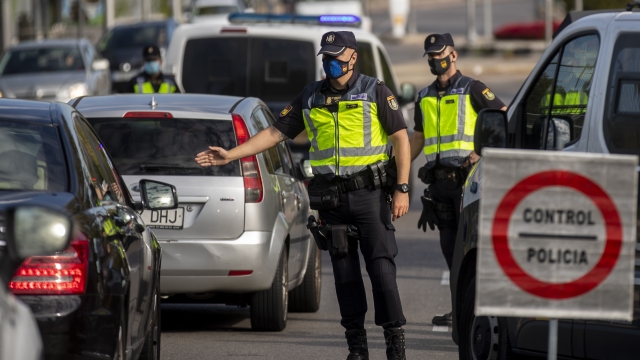 A U.K. virologist warns against imposing measures that people already hurt economically or mentally taxed would deem too repressive.

As Europe transitions from summer to fall, the coronavirus is quickly gaining steam across the continent.

"The schools went back. Universities have reopened. Simultaneously, across many geographies, there was a reestablishment of potential chains of transmission," said Dr. Chris Smith, a consultant clinical virologist at Cambridge University in Britain.

But despite cases rising fast, there is little political appetite to reimpose full lockdowns. That's for the best, says Smith.

"We have to move ahead with a plan to at least tolerate some level of spread of this virus."

Hotspots in Madrid, Paris, Northern England and elsewhere are leading governments to implement localized restrictions and to implore citizens not to let their guards down.

"We want to keep the economy moving … But the only way we can do that is if we all follow the guidance and depress the virus," said British Prime Minister Boris Johnson.

Smith says governments should come up with carefully balanced guidelines that keep countries as open as possible while keeping the virus under control.

"We really do have to look at this quite carefully as to what we're willing to do before quite literally the pill becomes worse than the ill," he said.

He warns against imposing measures that people already hurt economically or mentally would deem too repressive — especially if they are announced without an exit strategy.

In Madrid, the area in Europe currently most affected by the virus, non-essential travel in and out of the city has been prohibited for 15 days. In Paris, all bars have been ordered closed for at least two weeks.

And in parts of Northern England, it is now illegal for millions of people to socialize indoors with other households.