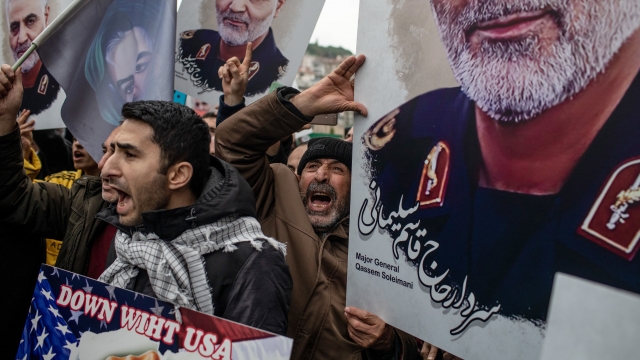 President Trump invoked the 52 U.S. hostages taken in Iran in 1979. President Rouhani tweeted about the U.S.' downing of an Iranian airliner in 1988.

The American killing of Iranian Maj. Gen. Qasem Soleimani in Baghdad is bringing threats of continued military reprisals, as both sides are airing historic grievances in a feud that dates back decades.

First, President Trump tweeted about 52 hostages taken in the storming of the U.S. Embassy in 1979, warning that the U.S. will strike 52 sites if Iran retaliates for Soleimani's death. Iranian President Hassan Rouhani responded by invoking the deaths of 290 people killed when a U.S. Naval crew shot down an Iranian airliner in 1988.

It began in 1953, when the U.S. supported a coup against Prime Minister Mohammad Mossadegh after he nationalized Iran's oil industry. Shah Mohammad Reza, the leader reinstated by the U.S., was later toppled in the 1979 revolution, which saw mobs surging into the American embassy.

As a perilous new chapter unfolds, Secretary of State Mike Pompeo scoffed this week at protests over the U.S. attacks and President Trump. He blasted Iran's current Supreme Leader, Ayatollah Ali Khamenei, for the country's troubles.

"They killed one of our most revered commanders and most senior commanders and they took responsibility for [it]. This is state terrorism. This is an act of aggression against Iraq. And it amounts to an armed attack against Iran and we will respond."

President Trump says the U.S. drone strike that killed Soleimani will diminish acts of terror by Iranian-backed militias he headed.

"Today, we remember and honor the victims of Soleimani's many atrocities, and we take comfort in knowing his reign of terror is over."

But Soleimani's daughter says things are not over — not now, with Iran promising revenge.

"Don't think by assassinating my father everything is finished."