You Can Probably Guess What Trump Talked About In South Korea 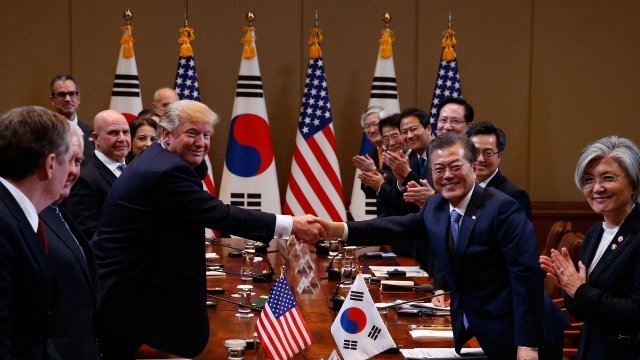 On his first presidential visit to South Korea, Donald Trump spent much of his time talking about the country's northern neighbor.

On his first presidential visit to South Korea, President Donald Trump spent a lot of time talking about the country's northern neighbor.

"We will together confront North Korea's actions and prevent the North Korean dictator from threatening millions of innocent lives," Trump said.

The commander in chief called North Korea a "worldwide threat that requires worldwide action" and emphasized that nations need to work together to pressure North Korea to end its nuclear weapons and missile programs.

He also said the U.S. is prepared for military action against the North "if need be" but suggested he's still open to diplomacy.

Pentagon Supports Diplomacy In North Korea But Weighs Other Options

Two congressmen recently asked the Pentagon what kind of casualties it could expect if a military conflict erupted with North Korea.

Those comments seem softer than some of his previous rhetoric. Trump infamously said the North "will be met with fire and fury like the world has never seen."

The North Korean theme will likely continue when Trump goes to China on Wednesday. He applauded China's efforts to curb the threat during his press conference with South Korea's president.

After China, Trump is scheduled to travel to Vietnam and the Philippines.